Stanley Tong has directed Jackie Chan in a total of six films - not including Once A Cop (1993) in which Chan has a cameo - and they include some of Hong Kong cinema's finest examples of action comedy as well as most outrageous stunts.

Chan reprises his role as cop Chan Ka Kui, who works with an Interpol inspector (Michelle Yeoh) to take down a drug lord. In one scene, he hangs on for dear life to a rope ladder dangling from an airborne helicopter.

The Los Angeles Times said: "To watch Jackie Chan, Hong Kong's king of kung fu comedy, in the fresh and exhilarating Super Cop is like watching Douglas Fairbanks Sr or one of the silent era clowns in one of their biggest hits." 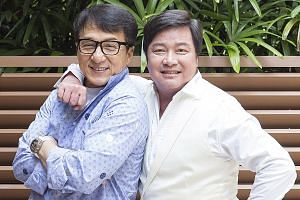 Set in New York City, this was the movie that broke Chan into the mainstream in the United States as it topped the box office in its opening weekend. He plays a Hong Kong cop up against a local crime syndicate and, in one scene, leaps from a rooftop onto the balcony of a building across the street without wires or a harness.

Time Out said: "Chan's insistence on his own fallibility and vulnerability, taken with virtuoso scenes like the fight involving 101 domestic appliances, shows why he means more to his countless fans than six US action stars put together."

In this instalment, Chan Ka Kui is up against an illegal weapons dealer. Jackie Chan swam with the sharks for this movie. As Tong recalls, it took 350 hours of filming in a tank filled with the razor-teethed creatures.

Website lovehkfilm.com said: "There is one terrific central action sequence and the shark tank chase at the end is fun, but nothing else truly surprising happens."

Chan (with co-star Kim Hee Sun) plays two roles - an archaeologist in the present day and a Qin Dynasty general. In a fun scene, he has to fight off baddies while trying to unstick himself from a conveyor belt smeared with glue.

Chan is tasked with tracking down priceless bronze animal heads. He careens down a hill in a roller-blading suit and glides underneath a moving truck.

The Straits Times said: "His absolute disregard for what the human body can take is why his stunts are such a thrill to watch. You marvel at what he does and then grimace when the falls, stumbles and burns are ultimately revealed."