SINGAPORE - Taiwanese model Boris Lin has fired a salvo at Ian Fang, asking the Mediacorp actor to stop coming between him and his girlfriend Carrie Wong.

Fang and Wong have been embroiled in a scandal over a series of leaked text messages in the past week.

In a statement released on Saturday (May 18) through his lawyer, Lin said that his other half, referring to Wong, had done nothing wrong. He also stressed - twice - that they were doing fine.

"I hope that after this matter, Mr Fang can stop trying to get between our relationship, and respect himself and his friends," he said in the Chinese statement.

Lin also said in the statement that he had not been by Wong's side sufficiently when she needed him, and has not done enough for her.

"Mr Fang and my other half had been very good friends, often joking when they speak to each other, and their choice of words may sometimes be more casual," he said.

"In this matter, I think that apart from Mr Fang taking the initiative in some of his words and actions, my other half has not done anything wrong." 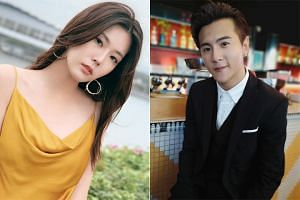 The statement by Lin is the latest in a developing drama surrounding Fang and Wong ever since private messages between them were leaked. The chats included coarse language that suggested they had a physical relationship.

Both actors have since apologised for their actions, denied that they were in a relationship and made police reports.

It garnered about 1,400 likes in five hours, while the account's followers had reached 5,300.

According to Chinese-language newspaper Shin Min Daily news, the account had only around 300 followers when it was private.

The account has several pictures showing Lin and Wong together, with one dating back to last June.

Lin's statement also said that the incident has entered the judicial process, and those distributing or reprinting the information on the footage may be punished under the law.

"I hope this matter can come to an end," he said.