Director Steven Spielberg usually takes 14 months to finish making a film, but his new work, The Post - which stars Oscar winners Tom Hanks and Meryl Streep - was completed in only nine, thanks to a cohesive team

Consider that most films take much more than a year to complete and you will appreciate the Herculean effort behind The Post.

Steven Spielberg took just nine months to make it after reading the script, casting heavy-hitters Meryl Streep and Tom Hanks in a story that most critics are predicting will dominate the Oscars in March.

The legendary director's films take 14 months on average to finish, he says. But he pulled this together fast because he wanted to make a point - about press freedom in the United States under President Donald Trump.

Speaking to The Straits Times in New York recently, Spielberg, 71, says: "I read the script at the end of February and started shooting in June. It's a short time.

"But I wanted the movie to come out this year because I thought there were truths in 1971 that were relevant today," says the Oscar-winning director behind historical dramas Schindler's List (1993) and Saving Private Ryan (1998). "I thought this is the time to do it."

The Post, which opens in Singapore today, documents The Washington Post and The New York Times' expose of a decades-long cover-up by US governments over the Vietnam War.

Set in 1971, it is told through the eyes of The Post's first female publisher, Katharine Graham (Streep), and her editor Ben Bradlee (Hanks) as they wrestle with whether to publish The Pentagon Papers. This was a wide-ranging study on Vietnam that successive US governments had secretly commissioned. They then buried the findings when they suggested the unpopular war was not winnable and continued to send thousands of young American soldiers into battle anyway.

Movie with a political agenda

As the Nixon administration tries to stop newspapers from running damning excerpts, the film offers an indirect but pointed comparison with President Trump's efforts to undermine journalistic freedom with his repeated attacks on the press today.

"I felt that, my goodness, this is an opportunity to be part of the national conversation," Spielberg says.

"And by using a great story about a great woman and a great man to show the kind of courage it took - to show that they weren't partisan, they were patriots; and if we were less partisan and more patriotic, we would start a new conversation that would get this country moving in a bipartisan direction, which is not happening right now."

Only someone with Spielberg's stature could get two equally big names - Oscar winners Streep and Hanks - on board on such short notice.

"I cast the picture carefully, but quickly. All my first choices said yes. They were also miraculously available, so that was the other thing that made it come together quicker.

"I also had a production happening in Italy and, when I pulled the plug on that, I moved the whole crew on that to The Post.

"And it wasn't like we just moved into buildings that existed because we didn't have time. (The crew) had to build sets, including the entire Washington Post circa 1971, and Graham and Bradlee's homes are sets.

"So there was a lot of set construction, but where there was a will, there's a way. And we were all working together as a team to get the story told this year and that's why it was possible," says the film-maker.

The Post is a movie with a political agenda and Spielberg is not bashful about saying it.

"Journalists in our story are heroes. These journalists in 1971 were dedicated to the principles of a free press and the rule of law, and were trying to do the right thing by getting these papers out to the American public."

It is also Spielberg's response to President Trump's claims that media outlets critical of him publish "fake news", and his administration's bid to rebrand its own distortions of the truth as merely "alternative facts".

"One of the reasons I wanted to tell this story this year was in reaction to 'alternative facts' or 'fake news' and to say, 'There's a big difference between a belief and a fact.'

"The facts are the foundation of the truth. There's a lot of disinformation out there today where it's only belief that is (deemed) interesting and important, not the facts. And this movie goes after that as well," says the director of the hit adventure movies Jaws (1975), Raiders Of The Lost Ark (1981), E.T. The Extra-Terrestrial (1982) and Jurassic Park (1993).

"The freedom of the press is standing on the edge of a cliff that they have never been pushed anywhere near in the past. And the cliff is that there are those who want us to believe there is no difference between belief and fact." 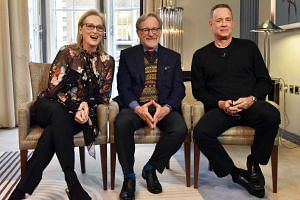 Women can help one another succeed, says Meryl Streep

What does Spielberg want audiences to take away from all this? "That the truth is making a comeback."

Yet he bats away the suggestions that The Post - along with Schindler's List, The Colour Purple (1985) and a growing body of work with a social conscience - make him a "public intellectual", as some observers have suggested.

"I'm a patriotic person, but not a partisan person. But I feel as I've gotten older, my tastes have grown more to stories that really happened. At this point, I'm more interested in what's happened in history than what's happening in my imagination. That doesn't mean I'm not going to make any more Jurassic Park movies, just that my interests are really about the past informing the present.

"Because I've always believed that you really can't appreciate all the freedoms and all of the hard and good times we're having today unless you understand who built the road we're now travelling down.

"And that's what I always tell my kids," he says of his five children, aged 20 to 29, with wife and actress Kate Capshaw, 64, and his 32-year-old son from a marriage to actress Amy Irving. "Because we all stand on the shoulders of all kinds of giants.