Crimson was the choice for a bevy of actresses, including Nicole Kidman, Heidi Klum and Edie Falco as well as Yvonne Strahovski (The Handmaid's Tale) and presenter Issa Rae in a one-shoulder Vera Wang. 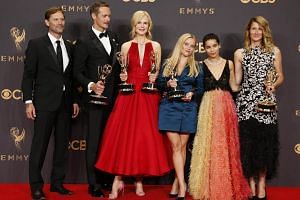 In Pictures: Winners of the 69th Primetime Emmy Awards

Metallic silver was the choice for a host of stars, including the actresses of Orange Is The New Black - Laverne Cox and Uzo Aduba - and Anna Chlumsky (Veep).

Of course, elegant black is always a red carpet classic and was the choice of Susan Sarandon, Lily Tomlin and Judith Light.