LOS ANGELES (WASHINGTON POST) - Yet another Star Wars celebrity is taking a blaster to much of his social-media past.

Rian Johnson has deleted all his tweets prior to Jan 25 of this year.

The action is particularly notable because the writer-director became an especially engaged user on Twitter leading up to the release of his popular and polarising film The Last Jedi last December (2017).

Johnson, who has nearly a million Twitter followers, now has fewer than 1,200 visible tweets - none from prior to this year, despite nearly a decade on Twitter.

Some comic-book and pop-culture sites began reporting this week that Johnson had deleted more than 20,000 tweets.

In response to these reports on Wednesday evening, Johnson tweeted that he took the action himself under "no official directive at all."

"I don't think I've ever tweeted anything that bad," Johnson tweeted.

"But it's nine years of stuff written largely off the cuff as ephemera, if trolls scrutinising it for ammunition is the new normal, this seems like a 'why not?' move."

No official directive at all, and I don’t think I’ve ever tweeted anything that bad. But it’s nine years of stuff written largely off the cuff as ephemera, if trolls scrutinizing it for ammunition is the new normal, this seems like a “why not?” move.

His action on Twitter comes in the wake of Disney's firing on Friday of writer-director James Gunn from Guardians Of The Galaxy Vol. 3.

Disney representatives did not immediately return a request for comment.

Johnson did not specify what kind of "trolls" he believes are defining the new normal. But the campaign against Gunn went viral last week when sparked by conservative online figures, who helped resurface Gunn's tweets from as far back as a decade ago - some of which he had described as shock-provocative "jokes" about rape and paedophilia.

Disney, in firing Gunn, called the tweets "indefensible" and not in line with the studio's values.

In recent days, right-wing critics also launched a campaign resurfacing decade-old video content once published by Rick And Morty co-creator Dan Harmon. Harmon apologised and deleted his Twitter account; his employer, Adult Swim, noted his apology in choosing not to penalise or fire him.

Such campaigns have arisen in the wake of Disney's firing of comedian Roseanne Barr from her ABC show in May, after she tweeted racist remarks about former Obama administration adviser Valerie Jarrett.

Johnson has directed at least two Star Wars actresses who have deleted social-media content or sworn off their accounts: Daisy Ridley and Kelly Marie Tran.

Tran and Ridley's characters have especially been singled out for criticism on social media since the rebooted Star Wars universe began featuring more female heroes and characters of colour in 2015.

When I talk to folks IRL I realize they’re looking at my twitter feed & thinking that no matter what I tweet I’m barraged by abusive SW tweets. But the truth is it’s all the same relatively small group of jerks, it really doesn’t take much muting to have a normal twitter life.

"I posted a thing about gun regulations, because I was at an event in tribute to the Orlando shooting at Pulse," Ridley said at the time. "People weren't nice about how I looked. And I was like, 'I'm out.' Simple as that. That is not what I signed up for." 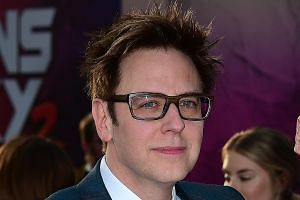 Disney axes Guardians Of The Galaxy director over offensive tweets

More than 240,000 people seek re-hire of Guardians of the Galaxy director James Gunn

By early last month, Tran had deleted her Instagram posts. Some fan sites pointed to online harassment as the cause.

Tran, a Vietnamese-American actress who plays the heroic mechanic Rose in Last Jedi, had offered upbeat and encouraging posts on Instagram prior to quitting.

Tran's publicist did not respond last month to The Washington Post's requests for comment.

But Johnson wrote in June about his larger view of online fans, tweeting: "On social media a few unhealthy people can cast a big shadow on the wall, but over the past 4 years I've met lots of real fellow SW fans... We're the VAST majority."

Johnson gave Last Jedi viewers at least four female Resistance warriors - including Tran's Rose. Such representation spurred spasms of backlash, including a now-removed "alt-right" Facebook page titled, "Down With Disney's Treatment of Franchises and Its Fanboys."

Johnson also tweeted last month about the difference between "not liking a movie and hatefully harassing a woman so bad she has to get off social media."