NEW YORK (REUTERS) - Plans by Disney to slow down the release of future Star Wars projects are getting a thumbs up from fans, who also hope that new movies in the multi-billion dollar sci-fi franchise will be more creative.

In an unexpected admission that the slew of Star Wars films and spinoff projects may be causing fan fatigue, Walt Disney chief executive Bob Iger said it had been a mistake to release a new movie every year.

"I think the mistake that I made - I take the blame - was a little too much, too fast," Iger told The Hollywood Reporter in an interview published on Thursday.

"You can expect some slowdown, but that doesn't mean that we're not going to make films.

"I think we're going to be a little more careful about volume and timing," Iger added.

Scott Collura, executive editor of entertainment website IGN, called the slowdown "a win for fans," recalling the anticipation in the past when there were long gaps between movies.

"It won't kill us to not have a new Star Wars film in 2020," Collura wrote in an opinion piece. 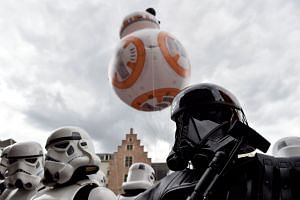 Too much Star Wars? Disney CEO says will slow down releases

Since 2015, Disney has released two of three planned movies based around characters originated by director George Lucas in 1977, and two standalone films.

In the past year, Disney has also announced a live-action series for its planned streaming service, a series of feature films written by the creators of television show Game Of Thrones, and another film trilogy bringing in new characters.

Many fans have failed to embrace the younger generation of characters, like Daisy Ridley's feisty Rey and John Boyega's rebel stormtrooper Finn in The Force Awakens.

"No one gives a flip about Rey, Poe or Finn," commented user CMO175 on the Hollywood Reporter comments page, complaining about the fate of Luke Skywalker in The Last Jedi.

Others said the movies had become too politically correct, with more women and ethnic characters, while some complained that the plots had become stale.

"Maybe having film releases spaced out a little more will give authors and artists some creative breathing room," wrote Darth Nobunaga on the starwarsnet.com fan forum.