MANCHESTER (GUARDIAN) - The boxing match between YouTubers KSI and Logan Paul on Saturday (Aug 25) was set to be, at least according to the hype, " the biggest event in internet history ". But in the end, it may have all been the prequel to another event, as the main fight ended in a draw in front of 20,000 people at the Manchester Arena.

Online, the fight was watched by millions, both on the official pay-per-view YouTube channel, and on bootleg livestreams on other platforms.

Neither of the men are professional boxers, having earned their fame for the videos they post on YouTube. KSI, real name Olajide William "JJ" Olatunji, has more than 19 million subscribers. He initially shot to internet fame with videos of him playing Fifa video games.

Logan Paul was one of the breakout stars from Vine, a now defunct social media app on which users posted humorous six-second videos.

Each comes with his share of controversies. In January, 23-year-old Paul posted a video showing the body of an apparent suicide victim , while KSI, 25, was accused of making sexist comments in his earlier videos . Both apologised in the aftermath of each case.

Appropriately enough, the boxing event too was contentious. The British Boxing Board of Control put out a statement ahead of the match distancing itself from the event: "Neither individual is licensed by the BBBBofC and the BBBofC does not participate in such events."

Among the fans who made it to the arena were 22-year-olds Luke Robinson and Laura Busby, both from Scunthorpe. "I've never been to a boxing match before, but we're massive KSI fans, so we thought we'd come," said Busby. "It's a really big deal for KSI," said Robinson. "It's not just a boxing match - it's personal." 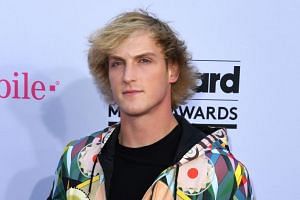 The encounter in the ring seemed to be important to Paul too. Referring to the uproar over the incident in January, he thanked KSI and said: "You saved my career."

The match had all the trappings of a professional boxing event, from the dramatic walkouts to the trash talk. Renowned ring announcer Michael Buffer even announced the main card with his trademark: "Let's get ready to rrrrrumble!"

This is the second time two YouTubers have fought in a white-collar match, in a phenomenon that aims to monetise online feuds between internet celebrities. Over the last few months, KSI and Paul have been curating the drama of their feud through social media. Adding to the soap opera, their brothers, Jake and Deji, also fought on the undercard, with Jae emerging victorious.

But after six evenly fought rounds, the judges scored a draw - meaning the drama will be extended to a rematch already scheduled for February. Interviewed after the fight, KSI said: "Let's do that again, that was fun. Holy shit."

Paul, too, seemed to have enjoyed the experience: "I think it's what the people want. Let's give them a motherf***ing rematch! … I feel like I won that fight, but it doesn't matter. What happened happened. The rematch is going to be f***ing crazy."

It's unclear exactly how much money the participants will make, but between livestreams, ticket sales, merchandise and the promise of a repeat next year, it's likely to be a small fortune.