When Leonard Cohen heard earlier this year that his ex-lover and muse, Marianne Ihlen, was dying, he penned her a loving farewell note. "Know that I am so close behind you that if you stretch out your hand, I think you can touch mine," he wrote.

It was said to have given Ihlen, immortalised in Cohen's song So Long, Marianne, a great measure of comfort as she slipped away.

Little did we know that Cohen was also foretelling a truth.

Not that we ought to be surprised. Today, Cohen himself has passed on, at the age of 82. In video clips of a press conference released on his Facebook page months earlier to accompany the launch of his latest album You Want It Darker, his 14th studio album, the singer-songwriter appeared frail and breathless.

Seven years ago, my wife and I had the chance to watch him live, performing at a vineyard in Australia. Then, despite being well advanced in years, Cohen skipped onto the stage and proceeded to lead his band through a three-hour set. He went through his catalogue as a seasoned pro would - Hallelujah, Bird On A Wire, I'm Your Man and more. By the end of it all, he left the crowd emotionally spent and spiritually uplifted. 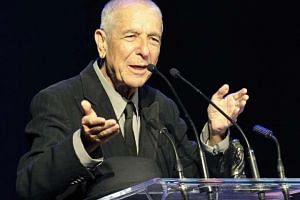 Cohen was 75 when we saw him perform. But the energy in his performance and the timelessness of his music led us to believe that there was still more left in his tank; I had even planned to catch him live a second time when he resumed touring.

Cohen once described his music as "sanctuary". To that, his fans would agree and add words such as "inspiration", "comfort", "gift", "beauty", "confession" and "redemption". They would all have been apt and true.

For me, as someone who dabbles in music and writes for a living, having encountered Cohen's music and poetry, learning to appreciate both, and getting the chance to watch him perform, the songs feel like an immense blessing.

Alvin Wong is a singer, songwriter and musician from the home-grown indie band Force Vomit and the editor of a watch magazine.