In the latest battle round of Sing! China, Singapore's Nathan Hartono was an action man.

In the episode of the Zhejiang television singing contest that aired in China last Friday, he stroked his hair, paced the stage and broke into a little run during a dramatic performance of the slow-burning Eason Chan song, We Are Lonely. And he cleared the round, one of the five contestants whom pop superstar Jay Chou chose to keep on his team and who will go on to compete with the other coaches' teams.

Although the round was to be decided only by Chou, Hartono's chances did not look good when one by one, the other judges - Harlem Yu, Wang Feng and Fei Yu-ching, who was Chou's guest for the episode - appeared to favour Huang.

Yu said Hartono should be careful not to overuse his crying tone. Wang warned Hartono: "I think that when you perform too much, it will offset the charm of your singing." 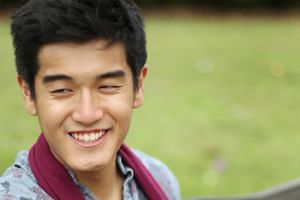 Although Fei praised Hartono's confidence - "he sings well and can still flip his hair, and with that flip, that look, the screams here start immediately" - he said he preferred Huang's relaxing performance.

Finally, Chou spoke. He said he was impressed by Hartono's "stage effects" because he himself does not have as many moves. "When I sing, I sing over there quietly and make fists - five, 10, 15," Chou said, as the other judges laughed.

Because he is hoping to stage a musical in China, he feels he needs a singer like Hartono, he added.

In an interview with The New Paper, Hartono said he had been "a little terrified" because he had lost his voice the week before the episode. "Thankfully, on the day itself, everything kind of fell into place. I had my voice, I didn't forget the lyrics... and I did what I set out to do on stage."

Besides Hartono, four others on Chou's team, including Chinese rocker Pu Xiang, also cleared the round. Sing! China is Zhejiang TV's revised version of its previous show, The Voice Of China.