They are two of four teammates in the contest vying to represent their mentor, Taiwanese Mandopop star Jay Chou, in the grand final at Beijing's Bird's Nest Stadium, which will be broadcast live on Oct 8. They will each perform a duet with Taiwanese singer Harlem Yu, a mentor on the show in previous seasons.

The winner, who will be decided by a panel of 51 judges and the celebrity mentors, will then compete in a solo round against the winner of the battle between Malaysian Janice Tan and Dabu from China, the other members of Team Jay Chou.

Dong has been rumoured to be following in the footsteps of last year's contestant Nathan Hartono, the first Singaporean to enter the grand final.

When previously contacted about the news, she said to The Straits Times: "I'd like to thank everyone for their support, but they will have to stay tuned to Sing! China to find out if the rumours are true." 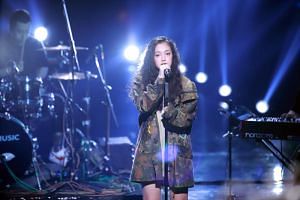 Singapore-based student Curley Gao is out of Sing! China, Joanna Dong and Olinda Cho hang on

Catch this Friday's episode of Sing! China on Jia Le Channel (Singtel TV Channel 502) at 9pm, which airs the same time as China.