Singapore-based Chinese student Curley Gao, 19, can finally take a breather now that she is out of the race in popular singing contest Sing! China.

Now that the intense competition is over for the Dunman High student, she wants to focus on her studies.

"I'll be preparing for my A levels and working towards getting into university. I'll continue my music journey as well," she says.

But Singapore still has a shot at having a representative take the stage at the Beijing's Bird's Nest Stadium during the finale, which will be broadcast live on Oct 8.

Singaporeans Olinda Cho and Joanna Dong, who are both on team Jay Chou, are still in the running. There is a chance they may be competing against each other in an upcoming episode.

Hot favourite Dong has been rumoured to be following in the footsteps of last year's contestant Nathan Hartono, who was the first Singaporean to enter the grand final.

When contacted, Dong, 35, says: "I'd like to thank everyone for their support, but they will have to stay tuned to Sing! China to find out if the rumours are true!"

In the episode scheduled to air on Friday night (Sept 15), Gao, a member of mentor Na Ying's team, was eliminated after she lost to her Chinese teammate Guo Xin.

She says: "I knew I did my best, so the scores did not matter to me anymore. Of course, it would be nice to advance to the finals. But I was just thinking, all right this is it, I can finally relax." 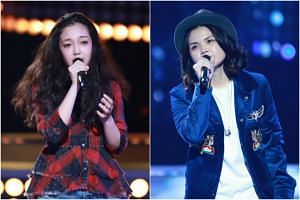 Olinda Cho and Curley Gao advance to third round of Sing! China

In Friday night's round, team members had to vie with each other for the right to represent their mentor in the grand final.

The competition is divided into two parts. First, a contestant performs a duet with a professional singer. The winner of the respective duet battles will then face-off against one another in an individual match.

At each stage, the winner is decided by the panel of 51 judges and the celebrity mentors.

Gao sang a duet with Chinese singer-songwriter Liang Bo, who won the first season of the contest, which was previously known as The Voice of China (2012).

The duo earned majority of the votes for their rock duet Boy, and Gao advanced to the next stage.

Gao sang Jacky Cheung's ballad She Came To Listen To My Concert, a 1999 hit whose lyrics were penned by Singapore's Liang Wern Fook.

But she was eventually beaten by teammate Guo, who will represent team Na Ying in the grand final.

Gao says: "My mentor Na Ying was so encouraging, she didn't want to see me go. She gave me some final advice and reassured me that I did well."