Two more shows by Caesar were announced and they sold out in a minute and a day respectively.

"We're booking the shows of the artists people are listening to," says Mr Zaran Vachha, 32, co-founder of events agency Collective Minds, which brought in Caesar.

"Of course people want to see Beyonce and Ed Sheeran, but if you delve into what people listen to on a daily basis, it's people like Caesar and FKJ."

FKJ, which is short for French Kiwi Juice, is a multi-instrumentalist, singer and musician from France.

Mr Vachha adds: "It might not be the mass population, but there's definitely a population and it's due to things like Spotify and YouTube... They'll listen to one track and it'll open a gateway to a whole genre or style of music."

The sold-out shows are a testament to the viability of bringing niche acts to Singapore. 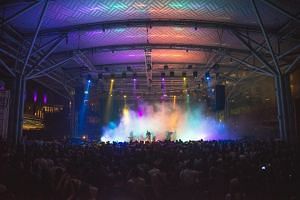 Chance for local acts to share stage with international artists

Mr Vachha moved to Singapore from Hong Kong about two years ago to start Collective Minds, and the company now organises shows across Asia, including Malaysia, Jakarta, Hong Kong and Seoul.

When it comes to curating acts, he believes that no one likes just one genre of music.

Part of the reason the company has so many shows is that Mr Vachha wants people to go out for gigs on a regular basis and hopes for this to become "the norm".

"If you think about cities like London or New York, sometimes there's almost too much to choose from in terms of the number of gigs... Singapore should also be considered one of those centres of the world, with so much culture going through it."

He admits that deciding which acts to book is based on "feeling". He also looks to artists who are gaining traction in London or the United States.

That said, he also wants to book acts people do not expect, like acclaimed American jazz musician Kamasi Washington, who played to a crowd of more than 1,000 people here in August last year.

It is also apparent that tastes here are shifting. Mr Vachha says: "I would have never booked him here two years ago for a standalone concert, but we filled the whole floor of the Capitol Theatre.

"You would never expect a young Singapore audience to be into that."