NEW YORK (AFP) - A six-hour documentary series airing this weekend has brought American R&B star R. Kelly back into the spotlight, revisiting accusations of criminal misconduct including having sex with several minors.

The Lifetime cable network show that premiered on Thursday (Jan 3) and will broadcast subsequent episodes Friday and Saturday sheds new light on charges against the artist, whose real name is Robert Sylvester Kelly.

Known especially for his hit I Believe I Can fly, the 51-year-old singer and producer was charged in 2002 with filming sex acts between him and a 14-year-old girl, but was ultimately acquitted in 2008.

The team behind "Surviving R. Kelly" held dozens of interviews filmed with members of the singer's inner circle.

In the documentary, backup singers detailed sexual relations between R. Kelly and three girls under the age of 16, including 15-year-old star Aaliyah, who died in 2001 in a plane crash.

The allegations are subject to criminal prosecution in several US states including Illinois, where R. Kelly lived as a resident of Chicago.

Aaliyah's mother Diane Haughton called the allegations "fabrications" and accused the witnesses of being "saboteurs of Aaliyah's legacy."

In the documentary, women portray R. Kelly as manipulative, violent and focused on young girls, allegedly demanding they call him "daddy."

Lizzette Martinez, who met the artist at age 17 as he was approaching his thirties, says she was a victim of "mental and physical abuse" during their relationship, which lasted several years. 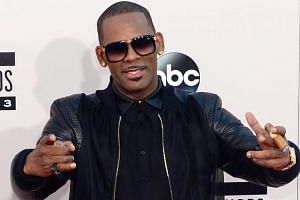 Singer R. Kelly is hit with another sexual allegation

R. Kelly rubbishes claims that he is keeping women in a 'cult' environment

"He stole my life from me being abused like this," she says in the documentary directed by filmmaker Dream Hampton.

"I don't think he understands girls that are young how impressionable we are and how traumatic these experiences are.

"They change you forever."

Neither R. Kelly nor his record label RCA responded to queries by AFP.

In May, the online streaming platform Spotify removed the artist's music from its playlists and recommendations after the Time's Up movement for gender equality urged the music industry to dump him over persistent sex abuse allegations.

The service ultimately backtracked on a policy that reduced exposure for artists accused of personal misconduct, however, after criticism that the leading streaming platform was hurting musicians over vague criteria.

R&B pop singer John Legend was among those who appeared in the documentary, and prior to its debut tweeted: "To everyone telling me how courageous I am for appearing in the doc, it didn't feel risky at all."

"I believe these women and don't give a f*** about protecting a serial child rapist," he said.

"Easy decision. These survivors deserved to be lifted up and heard. I hope it gets them closer to some kind of justice."