Minutes after the tickets for British singer Ed Sheeran's show on Nov 11 were sold out yesterday, local scalpers swung into action.

The tickets, which officially cost from $108 to $248, were eventually offered on sites such as Carousell and Viagogo at up to $2,520 at press time.

Sheeran's show on Nov 11 at the Singapore Indoor Stadium sold out yesterday in only 40 minutes after the tickets went on sale at 10am. At 11am, show promoter AEG Presents announced ticket sales to his second show, to be held on Nov 12.

By 4pm, ticketing agencies also told ticket buyers that all the tickets for the second show had sold out.

It is estimated a total of 20,000 tickets were sold for both shows. 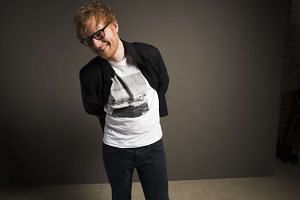 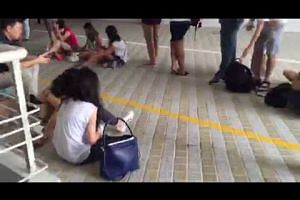 Heading off the problem of ticket scalping

The resale tickets appeared despite organisers AEG Presents having warned that "unlawful resale (or attempted unlawful resale) of a ticket would lead to seizure or cancellation of that ticket without refund or other compensation".

Hundreds of Sheeran fans queued up at the Singapore Indoor Stadium box office yesterday morning. Many of them slept there on Wednesday night to secure their chances of getting tickets when sales began yesterday at 10am.

The first few people in the line had queued for more than 17 hours.

Tickets to the Sheeran concert were also available online and at SingPost outlets.

Student Eugenia Tan was in line at the Toa Payoh North SingPost outlet at 9am and managed to score two Category 1 tickets.

She said she learnt from her previous experience trying to get Coldplay tickets online via Sports Hub Tix, whose website was overwhelmed by heavy traffic.

"I tried on the second day of the ticket release at the SingPost outlet and managed to get tickets, so I decided to just come straight here instead of trying online," the 22-year-old said.

The Sheeran show dates here have led some fans to bail out on their friends' weddings held on those two nights.

Veterinarian Ong Weijun, 32, is among the affected wedding couples. He told The Straits Times that two of the guests for his wedding on Nov 11 have informed him that they will be going to the concert instead.

He replied: "Not anymore."

A version of this article appeared in the print edition of The Straits Times on May 12, 2017, with the headline 'Scalpers offer Ed Sheeran concert tickets at up to $2,500'. Subscribe
Topics:
More
Whatsapp Linkedin FB Messenger Telegram Reddit WeChat Pinterest Print Purchase Article Copy permalink