PARIS (AFP) - Rihanna said on Thursday (May 23) she had been given complete freedom to design her first fashion line for French luxury powerhouse LVMH.

It is banking on the pop diva to find a new market of millennials beyond the reach of its traditional brands.

The Barbados-born superstar is the first black woman to head a fashion house for the Paris-based firm, which owns Dior, Louis Vuitton, Fendi and Givenchy.

Rihanna's new line Fenty - after Robyn Rihanna Fenty, her full name - was unveiled to journalists in the French capital on Thursday.

It is set to go on sale on Friday (May 24) in a pop-up store near the famous Place des Vosges.

"I just want to see things from my perspective. I'm a young black woman who loves and embraces all the young people's ideas and energies," she told AFP.

"It is about turning all that into something luxurious for this fashion house which has been doing it forever." 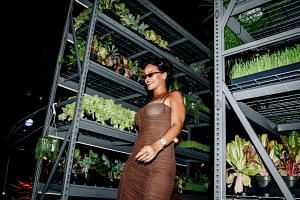 LVMH pairs up with Rihanna for new fashion brand

Beyonce teams up with Adidas to sell shoes and clothes

The singer, who has 170 million followers on social media, thanked the billionaire boss of LVMH, Mr Bernard Arnault, for giving her "carte blanche".

Despite its dominance, LVMH has not started a luxury brand from scratch since Christian Lacroix in 1987.

"I appreciated that they were flexible enough to allow me to have a different perspective of how I want to do things," Rihanna said.

The singer, who is working on her ninth album, got help from LVMH.

Mr Arnault said earlier this month that a "talented and multi-cultural" team had been set up behind the scenes.

The 31-year-old is not the only pop icon to make a fashion foray.

Beyonce, who has her own Ivy Park and House Of Dereon labels, last month signed a deal with German sportswear giant Adidas.