The younger Lee says bemusedly: "My father was a little neurotic in that he was always afraid that his family was going to end up on the streets.

"To which my mum would simply say, 'You only live once. Don't die with all the money or spend it on hospital bills.'"

He adds: "We never had the sense that we came from a privileged background. That's how we were raised and my siblings and I often think it's a good survival instinct."

No flamboyance, no razzmatazz. That is how his friend of 40 years and finance lawyer Francis Nwokedi, 52, describes him.

"Peter is one of the most grounded persons I've known," says the London-based British Nigerian. They met as students at St Edmund's College, a Catholic boarding school in Ware, Hertfordshire in England. "He's an honest man; fair, compassionate and humble."

Indeed, dressed for the interview in a simple batik shirt and camel pants, with no designer togs or expensive jewellery, he comes across as a man of modest and simple taste. 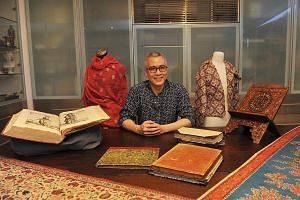 It was quite a shock to suddenly have a mother and to see her every day when we rarely saw her when we were kids. We had to rediscover ourselves as adults and, when we did, it was absolutely wonderful.

PETER LEE, on growing closer to his mother, who sparked his love for collecting textiles, when she visited him in London while he was in university

The only thing that hints at his privileged upbringing is his cultured air of sophistication and his refined sense of aesthetics, which is reflected in the family residence.

It is a rojak of traditional Asian and modern Western design and framed family portraits are found in many rooms, pointing to a close-knit family.

His father, his brother John, 55, a vocal coach, and he live there now.

His younger brother, Andrew, 50, lives in New York, where he works as a design consultant in packaging for the Estee Lauder Group and Dick lives in a shophouse in Blair Road. Their sister and the second eldest of the children, Patricia, died in a car accident in 1983, when she was 24.

The siblings are close and got along well even as children; there was no sibling rivalry, he says.

"Dick was always the ringleader and he'd make us play-act and sing a cappella. In fact, we sang a lot as kids at home."

Their repertoire included tunes by Bing Crosby, the Andrews Sisters and the soundtrack to That's Entertainment!, a 1974 film that compiles archival footage of musical films by MGM.

He says: "We knew those songs inside out. Each time they came on, we would do the impressions and sometimes even dressed in my mum and sister's wigs and clothes. My mum would find it so hysterical."

Much as music and the arts were a part of his upbringing, so too was his love for books and history, which his father supported.

He says: "My father knew I was interested in history so he would take me to this beautiful bookshop near Fitzpatrick's to buy whatever books I wanted."

Fitzpatrick's, in the early 1970s, was a posh expatriate-focused grocer in Orchard Road, where the Paragon shopping centre is today.

He went on to pursue a bachelor's degree in Chinese studies and a master's in archaeology at the School of Oriental and African Studies in London.

This was followed by a brief internship at the Chinese Art department at auction house Christie's in London in 1993 and a year-long stint as the editor of Orientations, an art publication, in Hong Kong before he returned to Singapore.

He was an art consultant from 1994 to 2000 for the now-defunct Plum Blossom Gallery at the Raffles Hotel, which was among the first galleries here to show contemporary Asian art.

Later, he worked at Sotheby's until 2008, writing essays on art for the auctioneer's South-east Asian catalogues. In the time between, he also began consulting for the National Heritage Board and Baba House.

Asked what his work with these institutions entail, he says self- deprecatingly: "I help them develop their collections through donations and encourage other families to donate stuff. I am really a resident busybody."

Dr Alan Chong, director of the Asian Civilisations Museum and the Peranakan Museum, who has known him for more than six years, paints a more objective picture. He says Lee has been "a marvellous supporter in terms of his family's donations and also his important research and advocacy of culture in Singapore."

Dr Chong, 54, adds that Lee's approach to understanding Peranakan art has also been an important contribution to the study of the culture.

He says: "To Peter, Peranakan is not just a Chinese-Malay blend or confined to the Straits Settlements. It's also a culture that embraces Europe, India, Japan. Many features of Peranakan culture were once shared across the Indian Ocean and South-east Asia, so Peranakan culture is really Asian history in general."

These ideas will be explored in the upcoming exhibition that Lee is curating at the Asian Civilisations Museum. Titled Port Cities, the show opens in November and features exhibits ranging from textile and photographs to maps and pieces of furniture that belong to people from these multi-cultural communities in Asia's port cities.

On being a cultural multi-hyphenate, he says: "The satisfaction is not in the name. It's from doing something that hasn't been done before.

"Unlike other culturally mature countries, Singapore has not been very good at documenting its own history. For me, doing that is the satisfaction."