SINGAPORE - The last lap of awards season has come with the 91st Academy Awards, the most prestigious of the accolades - and red carpets.

And at this year's Oscars, which took place in Hollywood on Feb 25 morning Singapore time, those who embraced colour or an unusual silhouette stood out, proving that taking a gamble can be a winning move.

The early appearance of stage actor Billy Porter on the red carpet set the bar high with a custom velvet creation by designer Christian Siriano. The top was a closely cut tuxedo jacket complete with bow tie and cummerbund, and the bottom was the billowing crinolined skirt of a ball gown. Tony Award-winning Porter, who has recently risen to mainstream fame, is the representation of queer culture pushing the boundaries for everyone else to follow.

And follow they did, as in the case of Chadwick Boseman. The actor, known for playing the titular superhero in Black Panther, has been successfully making unconventional fashion choices. The actor's Givenchy haute couture suit - a new men's category from the French house - was richly embroidered, complete with wide trousers and a long silk scarf for subtle flair. It cut an elegant silhouette that bucked tradition.

Other standouts from the men included Stephan James (Homecoming, 2018 to present) in a scarlet velvet tuxedo. Though classic, the vibrant colour gave the actor visibility befitting a rising star. Nicholas Hoult (The Favourite) was dressed in a mohair Dior Man suit featuring a silk sash from designer Kim Jones' latest collection in January. Again, a smart twist on a classic.

Less inspiring was Rami Malek, who opted for a no-frills slim tux by Anthony Vaccarello at Saint Laurent. He did land the perfect shiny accessory for it though - a Best Actor statuette as the iconic musician Freddie Mercury in the biopic Bohemian Rhapsody.

Joyous pink made numerous appearances among the women. It was on Gemma Chan (Crazy Rich Asians) as a smocked Valentino gown complete with pockets. Her signature fashion trick recently has been understated glamour paired with the insouciant gesture of her hands in her pockets. It is refreshing, young and a paragon of modern red-carpet dressing.

Also in pink was Helen Mirren, who wore a custom dress by surrealist house Schiaparelli. The feather-light tulle creation had layered dimensions of orange and pink, and though simple in silhouette and free of embellishments, was accessorised with more than US$6 million (S$8.1 million) worth of jewellery.

But for it to be a trend, one must count the numbers. There was tidying maestro Marie Kondo in Jenny Packham, recent Grammy Award winner Kacey Musgraves in Giambattista Valli, the maverick rapper and actress Awkwafina in DSquared2, and American Horror Story star Sarah Paulson in Brandon Maxwell.

Maybe it was a reclamation of the colour and its associated femininity. From frothy tulle to body-hugging sex appeal, there were shades and styles to tickle one pink.

On the flip side, some of the women ushered in a more masculine look. Comedians Amy Poehler and Melissa McCarthy wore beautiful trousered outfits.

The former was in an Alberta Ferretti tuxedo cut in the le smoking style, and the latter an old Hollywood cape and palazzo pant look by Brandon Maxwell. It was a breath of fresh air on the red carpet and evidence, if any was needed, that pants fit comfortably into the vocabulary of glamour.

And then there were the gowns, which have always been the bread and butter of red carpet dressing. 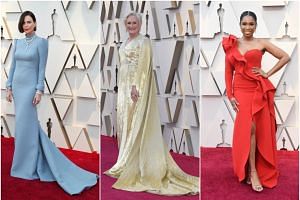 In Pictures: Glitz and glamour on the Oscars red carpet

This year, the arching style seemed to be pared-back classicism. There is something in the air about modest extravagance and it was showcased best in the outfits of Lady Gaga and Glenn Close. The two were nominated for Best Actress (forA Star Is Born and The Wife respectively), a category in which they have been competing against each other for the whole of this awards season.

Lady Gaga turned up in a fairly modest black Alexander McQueen gown. It had a bit of a train and boxy padded hips, and was worn with black leather gloves and a marvel of a necklace - one which featured the Tiffany diamond, one of the world's largest yellow diamonds at 128.5 carats.

Close, on the other hand, came as an Oscar statuette. The golden number from Carolina Herrera was made of around 4 million beads and reportedly weighed around 19kg. The clean lines and simple silhouette balanced out the sheer material pizzazz of the dress.

Olivia Colman, who won for Best Actress for her role as Queen Anne in The Favourite, had on a custom Prada gown: turtleneck A-line in green emerald silk, with an embroidered organza cape knotted at the back into a bow. Elegant and unfussy, it was a dress perfectly matched to its wearer.