Professional wrestler John Cena, who voices the titular character in the animated film, Ferdinand, is serious about learning the language

When pro-wrestling company WWE (World Wrestling Entertainment) tried to break into China a few years ago, the powers that be thought it would be a good promotional stunt to have one of its American stars travel there and toss around a few Mandarin phrases.

But nobody expcted professional wrestler John Cena to become obsessed with the language and dazzle everyone with his abilities at press events such as one in Shanghai in June last year, the video of which quickly went viral.

He still lights up when he gets a chance to converse in it, as he does in an interview with The Straits Times in Los Angeles, although he modestly describes his proficiency level as "remedial".

"I've been studying Mandarin for five years and I still speak like a third grader," he says with a smile.

The 40-year-old was chatting to reporters at a recent press day for the animated movie, Ferdinand, which opens in Singapore tomorrow. 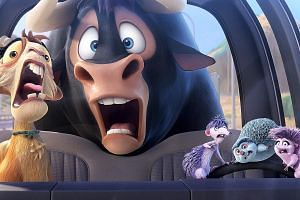 Animated film Ferdinand teaches kids to be themselves

It features Cena as the voice of the title character - a tough-looking but peace-loving bull who would rather smell flowers than enter a bullfighting ring - and is adapted from a popular 1930s children's book.

The wrestler says people take one look at his 1.85m, 114kg physique and immediately assume he is "built to do one thing and one thing only: big-guy stuff".

On the days when I want to just cruise through Instagram, I have to tell myself that would be fun, but do it after half an hour's worth of cards. And I try to listen to podcasts and watch CCTV. I just try to immerse myself in the culture as much as I can.

ACTOR JOHN CENA, on how he learns Mandarin

"So, it was really easy to be able to relate to Ferdinand in that regard."

But "everyone in the course of his life has been subject to that sort of judgment", he believes, and says it does not bother him.

"I enjoy the process of trying to change their minds and it is a patient man's game. But project after project, meeting after meeting, they go, 'Hmm, he's more than just a big guy,'" says the star, who played Amy Schumer's sensitive bodybuilder boyfriend in the romantic comedy Trainwreck (2015).

Cena says the good-guy character he plays in WWE matches "is extremely close to who I am in real life".

"It's just that many facets of my personality are turned up louder and certain facets are turned very soft. When I'm in the WWE, I'm usually a little more excited, more intense."

Still, fans are often surprised when they encounter him in real life. "If you catch me outside the ring, we're not going to wrestle each other in a bar, but I get that perception. People see what I do on television and they immediately think I'm going to kick the door in."

Cena also defies sartorial expectations: He prefers wearing well-tailored suits to the shorts, baseball cap and T-shirt he dons when he fights.

"In normal life, I love to wear a suit. I like the uniformity of a suit and the creativity comes from the patterns and the ways you can create style from it," says the wrestler, who also surprised fans when he proposed to fellow wrestler Nikki Bella, 34, after a match earlier this year.

Then, of course, there is his ability to speak Mandarin. When this reporter asks him about it, Cena looks quietly thrilled and pauses dramatically before launching into an explanation - in Mandarin - of why he decided to learn the language.

The WWE was trying to drum up business in China, but the Chinese had little understanding of American pro-wrestling.

It had no celebrities who spoke Mandarin, a major stumbling block when its matches require wrestlers to weave in narratives. If the sport is ever to take off in China, fans need to "watch and understand" these stories and "invest in our superstars", he says.

Despite his efforts, he admits that American pro-wrestling has not caught on that quickly in China. "It's a very slow process, but I do weekly videos on WeChat and it's just winning people over one by one."

Yet, the star continues to be a fan of all things Chinese.

He added that he loves going to China and seeing how the country has changed each time.

But with a schedule that can include up to 250 matches a year and daily workouts to stay in shape, how does he fit in Mandarin lessons? "I don't have a lot of free time, but when I do, for an hour or two of my day, a tutor comes over and we just talk."

In addition, he always carries a doctor's bag that holds "a Ziploc bag with two huge stacks of flashcards - and each stack used to take me about an hour and a half to go through and now it takes me 30 minutes".

"So, on the days when I want to just cruise through Instagram, I have to tell myself that would be fun, but do it after half an hour's worth of cards.

"And I try to listen to podcasts and watch CCTV. I just try to immerse myself in the culture as much as I can."

It is a lot of effort, he concedes.

However, he says: "Xian zai wo ke yi shuo zhong wen (now, I can speak Mandarin)."

A version of this article appeared in the print edition of The Straits Times on December 20, 2017, with the headline 'Punching above his weight in Mandarin'. Subscribe
Topics:
More
Whatsapp Linkedin FB Messenger Telegram Reddit WeChat Pinterest Print Purchase Article Copy permalink