WASHINGTON (Washington Post, NYTimes) - Prince Harry confirmed his relationship with American actress Meghan Markle in an unusual statement on Tuesday (Nov 8), when he attacked the "racial undertones" of British news coverage and social media harassment of his new girlfriend.

Already the relationship has sparked discussion of the veracity of the notion of "royal purity". An article in the Daily Mail spent three paragraphs talking about the crime rates in the Los Angeles neighbourhood where Markle's mother now lives, describing it as "one of a cluster of Los Angeles boroughs famous for gangs".

Generally, British tabloids have gone bonkers since news of the romance broke last month. Here's a primer to bring you up to speed.

She co-stars on the USA Network legal drama, Suits. She was raised in Los Angeles and now lives in Toronto, where her show is filmed. 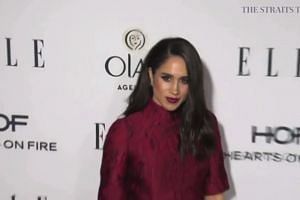 In an essay for Elle UK magazine, she wrote of how frequently she is asked, "What are you?" Her dad was a lighting director on shows including Married With Children... And he's white. Her mom was a social worker. And she's African American. "And there was my mom, caramel in complexion with her light-skinned baby in tow, being asked where my mother was since they assumed she was the nanny," Markle wrote. "It's either ironic or apropos that in this world of not fitting in, and of harbouring my emotions so tightly under my ethnically nondescript (and not so thick) skin, that I would decide to become an actress."

3. Another fact that has caused shock waves in England: She is divorced.

She was married to a longtime boyfriend, film producer Trevor Engelson, from 2011 to 2013.

4. Like her royal beau, Markle is a passionate humanitarian.

She does frequent advocacy work for the United Nations and World Vision Canada, travelling internationally to promote gender equality and access to clean water. She designed a sleek, but accessible line of women's wear for the Canadian department store Reitman's.

5. Three years ago she launched a smart, substantive lifestyle website, The Tig.

"The moment Suits became successful and I realised people (especially young women) were listening to what I had to say, I knew I needed to be saying something of value," she wrote in an essay on the site.