On Sunday, the 54-year-old was honoured for her final role at the International Indian Film Academy (IIFA) annual awards ceremony.

She was named best actress for her portrayal of a character who seeks to avenge the gang rape of her stepdaughter in the thriller Mom.

Sridevi drowned in her bathtub in February at a hotel in Dubai, where she was attending a wedding.

Thousands of fans lined the streets of Mumbai as a condolence service was held.

On Sunday, India's biggest stars turned up in Bangkok for a riotous evening filled with glamour and stunning dance routines at the IIFA event, dubbed Bollywood's Oscars.

Irrfan Khan, known internationally for his roles in blockbusters Life Of Pi (2012) and Slumdog Millionaire (2009), scooped the prize for best actor but did not attend the ceremony after revealing earlier this month that he had a rare tumour. 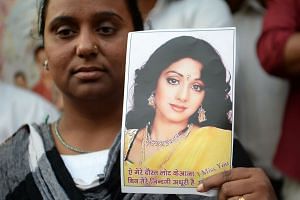 The 51-year-old, who was in the 2016 film Inferno alongside Tom Hanks, is one of Bollywood's most globally recognised exports, with a stellar career at home and in Hollywood.

He bagged the award for his role in Hindi Medium, a film highly critical of the class divide in India in which he plays a father trying to get his daughter into a prestigious school.

With an audience of more than 850 million, the event is one of the world's most-watched annual entertainment shows.

It will be broadcast globally on television on July 29.