LOS ANGELES (REUTERS) - The world's most watched stretch of red carpet seized the spotlight in Hollywood on Monday (Feb 29), as a dazzling parade of stars in luxurious gowns, glittering sequins, and daring necklines strutted and twirled on their way into the Academy Awards.

A pale yellow Louis Vuitton gown adorned with silver paillettes was one of the first looks to shimmer down the 500 foot-long stretch of carpet, worn by Alicia Vikander, nominated for best supporting actress in The Danish Girl.

"Just being here feels so surreal," said the Swedish actress sporting a high ponytail. "I have butterflies in my tummy." 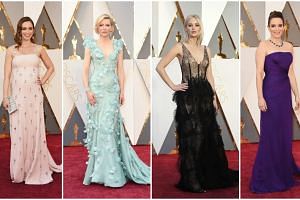 In a similarly skin-baring dress, best actress nominee for Brooklyn Saoirse Ronan channeled her inner mermaid with a sparkling emerald Calvin Klein dress with an open back and dramatic V-neck.

"I'm very proud to be Irish," said the nominee, who also wore green when first nominated for an Oscar for Atonement in 2008.

Barely covered was Olivia Wilde - the bodice of her Valentino dress was little more than two narrow vertical panels - while a dramatic side split and cut-out diamond at the midriff of Rooney Mara, nominated for supporting actress in Carol, raised eyebrows.

Black may be a classic look for the Academy Awards, but blue was popular this year, including for nominee Sylvester Stallone's tuxedo.

A royal blue silk Gucci with cascading ruffles was the choice of Brie Larson, the heavy favourite to win in the best actress category for Room, while Naomi Watts opted for blue sequins by Armani Prive.

"This has been my dream since I was seven years old," Larson enthused before making her way down the phalanx of photographers.