Being Captain America is both a joy and a burden, says Chris Evans

Chris Evans does not mince words about his career before he became an A-lister.

"If you look at my IMDb page, you'll see that I made a decade of s***," says the 34-year-old, whose name turns up in terrible teen comedies Not Another Teen Movie (2001) and The Perfect Score (2004) on the movie database.

To say that he is glad to have graduated to Steve Rogers/Captain America is an understatement. And he says he could not have achieved it without an ensemble of strong supporting players. 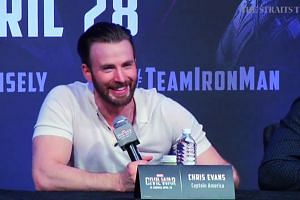 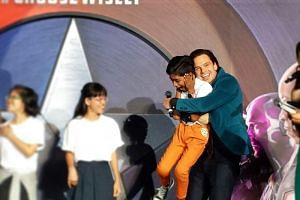 "I just wanna make good movies. But it's a team sport. And that's a beautiful thing. There is no way that anyone in the Marvel universe is vying for leadership or ownership," says the actor yesterday, while in Singapore on a Captain America: Civil War publicity tour.

Fans and critics gush about how the volatility of Falcon (Anthony Mackie), the wit of Tony Stark (Robert Downey Jr) and the sarcasm of Ant-Man (Paul Rudd) are charismatic qualities. That sort of wise-cracking self-awareness is out of the question for Captain America, a character who embodies values from an era when men were strong and silent.

We looked for some surprising choices as we didn't want it to be completely predictable to the audience as to who's going to pick which side.

JOE RUSSO (above), who directed the movie with his brother Anthony, on how the two camps in Captain America: Civil War were decided

We try to get to know the culture we're in and eat the food, whereas Team Iron Man would go from the press conference to the spa, from the spa to their jet. It's about learning stuff about the people, stingray, chilli crab, stuff like that, learning 'yes, lah' or 'no, lah'.

ANTHONY MACKIE (above, who plays Falcon) mock-dissing Team Iron Man on how they approach press conferences

MACKIE on the costumes of Iron Man, Black Widow, War Machine, Vision and Black Panther respectively. His character Falcon was described as having a "bird suit" in the movie

You go to the gym, pick up heavy stuff and you put it back down. You do that till you can't do it anymore and you get big. It's real simple.

CHRIS EVANS (above), who plays Captain America, on his workout routine

This movie changes the psychology of the Marvel universe in a significant way and the ramifications of Civil War are going to carry over into Infinity War. It's probably the most important Marvel movie to date.

RUSSO on the importance of the movies. Avengers: Infinity War is slated to be a two-parter due for release in 2018 and 2019 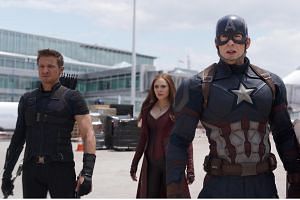 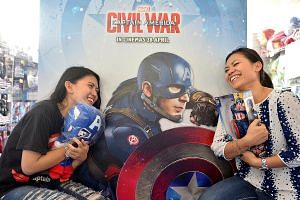 Shop, shoot and sweat at festival

Evans talks about how his real personality is more like the edgy Human Torch/Johnny Storm he played in Fantastic Four (2005).

"He's a selfless man and any conflict he has, he buries inside. In film, you want to see uncertainty and conflict. He doesn't have that because he puts everyone else before him. I'd love to see him be more sharp and cynical," he says of the Captain.

Marvel creator Stan Lee himself has reminded Evans that wearing red, white and blue means he should set an example in real life.

"He, in passing, reminded me that playing this role has an impact on people. It's part of the joy and part of the burden," Evans says.

Adding to that weight is that trait unique to the comics world - fans expect that, in real life, he should embody the virtues of his superhero character.

"It's tricky and it's in my mind. I could never be who Captain America is, but it does put a certain responsibility on your back. It echoes in my head about how I want to live my life," says Evans.

"You have all these people - Mackie, Downey, Rudd - making jokes and they're hilarious. But not everyone can make jokes. Some people have to be the rock."

Mackie, on the other hand, has no such dissatisfaction with his character of Sam Wilson, aka Falcon, a former soldier who puts his wingpack and drones into service on behalf of his good friend Rogers.

"I enjoy how the character has grown. Every character and actor gets his moment to show his personality. Falcon's relationship with the Captain speaks so much to people because they are truthful and vulnerable with each other," says the 37-year-old.

That loyalty is put under strain in the movie when, to Falcon's dismay, the Captain stands by his childhood pal Bucky, even after the latter is brainwashed into becoming an unstoppable assassin, Winter Soldier, by evil organisation Hydra.

"Bucky is the friend that nobody wants. This guy should be on probation. His parents should let him play Xbox and not let him leave the house," says Mackie, who made his name in films such as Oscarwinning war drama The Hurt Locker (2008).

Actor Sebastian Stan, 33, naturally does not think his character of Winter Soldier should be hated or punished.

"I never know where they are going to take it, where the writers will take the character. Hero or victim? In this movie, I got to do a bit of both," he says.

"We introduce the villain in the first act. Second act, the hero and villain come into conflict. Third act, the hero defeats the villain. We wanted to flip that on its head," says the 44-year-old who, with his brother Anthony, directed Civil War and the previous instalment, Captain America: The Winter Soldier (2014).

Instead of having a villain with superhuman powers, the antagonist in Civil War is a man seeking revenge.

"The villain is empathetic. He's suffered a loss and wants someone to pay," Russo says.

He is also aware that the idea of a hero such as Captain America, who embodies old-fashioned values, could become a loaded symbol in a time when presidential hopeful Donald Trump wants to "make America great again", in the words of the tycoon's campaign slogan.

Russo says: "My father was a political figure. My brother and I have strong points of view in politics. We are interested in topicality and current events. So it's gonna find its way into our storytelling."

In the film, the Avengers are split over the question of accountability, he says.

"Who has the right to wield power? What rights do the strong have over the weak? The film is about that. The world is dealing with similar issues now. It's forcing people to take extremist points of view."