It was not a performance hiccup from the well-known opera singer but an indication of how overwhelmed he felt when he spoke about being honoured for the 50th anniversary of his Metropolitan Opera House debut.

"For us, the opera singers, it is just like Frank Sinatra said: New York, New York, if you made it, you made it everywhere," the 77-year-old said on Friday (Nov 23).

The Met made sure that the occasion was marked by unusual gifts.

"Since you have owned this stage for your entire career, we thought we'd give you a piece of it," said Met general manager Peter Gelb.

"So this was removed from the stage earlier this week," he added, referring to a slab of flooring.

He also gave the Spanish icon his leather jacket from a 1990s performance of Verdi's Otello, which had been dipped in gold to commemorate the golden anniversary. 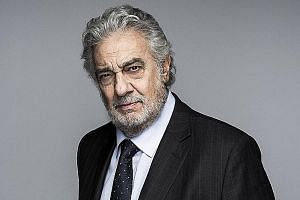 "This puts you and Elvis (Presley) in the same class," Mr Gelb said of the flamboyant pop singer's sartorial style.

The audience was also treated to a montage of Domingo's career, including a scene from Sesame Street with Miss Piggy, reported Billboard magazine.

Domingo, who also performed on Friday, paid tribute to his supporters. "The generations go, go, go. I'm very happy to be surviving. There are some of you who were at my debut. You are the judges. You are the ones who make an artist.

"So thanks to you, I have been coming for a half-century."

Domingo, who has reinvented himself as a baritone from a tenor, has shrugged off some critics' observations that he is no longer as dominant in his stage craft and should call it a day.