The trailer for Warner Bros' Fantastic Beasts: The Crimes Of Grindelwald, to be released in November, also gave fans a first glimpse of actor Jude Law as a dapper, bearded, young version of Hogwarts' venerable headmaster Albus Dumbledore, and featured parts of the famous Harry Potter music score.

The Harry Potter spinoff, which will eventually include five movies, is set some 70 years before Harry Potter went to the British boarding school and learned to become a wizard.

The Crimes Of Grindelwald trailer was the first to show Hogwarts as part of the Fantastic Beasts story, which centres around Newt Scamander, a magizoologist with a suitcase full of strange creatures.

"omg Hogwarts!! Dumbledore!! The Harry Potter Theme!! the chills!! the tears!! the memories!! sooooo hyped!!," wrote one fan, Hunter, on YouTube after watching the trailer.

"Omg... I was dying... Like Hogwarts is magical... I can't even express to you how happy I am that we're going to be seeing that beautiful castle again﻿," commented Dhanya Binoy, another excited fan.

The first movie, Fantastic Beasts And Where To Find Them, which was written by Rowling, made US$814 million (S$1.067 billion) at the global box offices after it was released in November 2016.

Rowling has said she thinks of the younger Dumbledore as a gay man who fell in love with Gellert Grindelwald, who later turned out to be evil and violent. 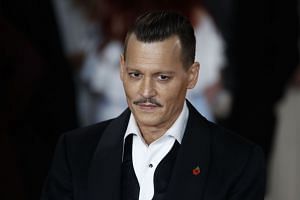 Blockbuster movies to look out for in 2018

In the trailer, Dumbledore is shown in a Hogwarts classroom, and later telling actor Eddie Redmayne's Scamander: "I can't move against Grindelwald. It has to be you."

The movie also gives fans a glimpse of Johnny Depp as a pale, long-haired, dishevelled Grindelwald, the character who embodies the dark forces in both the Harry Potter and Fantastic Beasts movies.

The eight Harry Potter movies made US$7 billion at the global box office. Fantastic Beasts: The Crimes of Grindelwald will be released on Nov 16, 2018.