NEW YORK (AP) - Netflix will give The Irishman an exclusive theatrical release for about four weeks, providing theatres most of November to play Martin Scorsese's big-budget crime epic, before it lands on the streaming service.

Netflix said the film will open theatrically on Nov 1 and begin streaming on Nov 27.

The release plans for Netflix's most expensive film had been a subject of much conjecture ever since the streaming service greenlit Scorsese's movie.

The director is one of the most ardent proponents of cinema preservation, but he earlier told The Associated Press that he signed up with Netflix without any condition of a theatrical release.

Because of the movie's pedigree, theatre owners had lobbied Netflix to give The Irishman a traditional, wide release. Netflix instead has said the film will be released in select theatres. The major chains, including AMC and Cinemark, have refused to play movies that do not adhere to the standard 90-day exclusivity window. 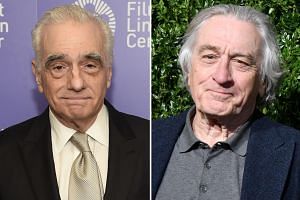 Netflix last fall first began releasing certain titles in theatres first, beginning with Alfonso Cuaron's Roma, the Coen brothers' The Ballad Of Buster Scruggs and the Sandra Bullock thriller Bird Box. This fall, it will expand that strategy to more films and, in some cases, elongate theatrical runs to about four weeks.

Steven Soderbergh's Panama Papers satire The Laundromat, with Meryl Streep, will open on Sept 27 in theatres and premiere on Oct 18 on Netflix.

The Eddie Murphy-led Dolemite Is My Name will hit theatres on Oct 4 and begin streaming three weeks later.

The Two Popes, with Jonathan Pryce playing Pope Francis and Anthony Hopkins as his predecessor, Pope Benedict, will open on Nov 27 before a Dec 20 Netflix premiere.