New movie Searching is a mystery thriller about a father looking for his missing daughter told entirely through a computer screen.

The movie's director, Aneesh Chaganty, will be the first to admit that the whole thing sounds like one big gimmick.

In fact, this is the precise reason he rejected the offer from a movie studio to turn this into a feature-length movie at first.

"It was this incredible moment where no film-maker ever gets this kind of opportunity. But in that instant, I said 'no'," says the 27-year-old Indian-American, who wrote and directed commercials at Google's Creative Lab.

"I think I found a way to make it not a gimmick if I kept it to just eight minutes because it could be cool and engaging and be over before anyone got bored.

"I was worried that turning it into a feature-length film would just stretch it right back into a 90-minute gimmick."

Given the rave reviews that Searching - a 100-minute feature starring John Cho and Debra Messing - ended up getting, it is perhaps a good thing then that the director was not the only one at that pitch meeting.

His friend and film-making partner Sev Ohanian, who ended up producing the film, reportedly kicked Chaganty under the table and piped up: "We'll be in touch."

It was two months after that meeting when the pair got serious about the possibility of the story becoming a proper feature.

One day, they coincidentally sent texts to each other - both saying they had ideas for a potential opening scene.

Chaganty says: "In that moment, there was a light bulb that went off where we realised the potential of this format with this story."

It turns out that their ideas were exactly the same: To create a montage sequence that takes place over many years of a family's life using information stored on their desktop computer.

That means playing back video clips from birthday celebrations and graduations, as well as looking through notes and appointments on the computer's calendar system.

Ohanian, 30, says: "Our idea with the opening scene was - we wanted to create something that, within five minutes, audiences would forget that what they were watching was unfolding on screens and just get sucked into the story. Hopefully, we did that."

The director adds: "Yes, because for this movie to work, we needed to get behind the characters. Giving it an emotional core is the only way this movie stops being a gimmick and starts being a story." 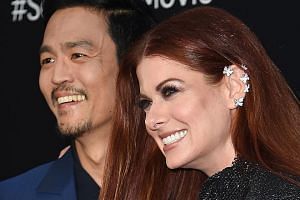 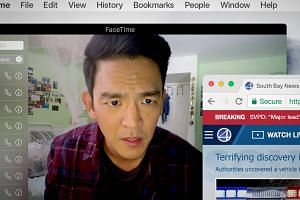 Tapping anxieties about parenting and technology

Clearly, audiences and critics agree. Since the film opened in the United States last month, it has received much acclaim for being compelling and moving despite the risky and unconventional way the story is told.

Peter Travers of Rolling Stone wrote: "The film is a technical marvel with a beating heart, which makes all the difference."

At Sundance Film Festival, where the film premiered months earlier, it picked up the Alfred P. Sloan Feature Film Prize.

All the good response must come as a relief to the film-making duo, given the technological challenges they went through to put it together.

"To talk about it gives me anxiety because it was such a technically challenging process."

Since technology is so integral to the movie, the film-makers point out how it could not have existed just four years ago.

"It sort of exists right now because it can exist right now," Chaganty says of the film, which makes use of apps similar to FaceTime, Skype, Facebook and Snapchat.

"The tools we are getting every day, every week, every month - whether it's an app, a website or a device - they all allow us to emote, feel or connect in a different way.

"Our objective with this movie was making sure we used all of those tools and maximising what they could do in a way that was only possible for the year it is set in."

He hopes, too, that the film gives technology "a more holistic perspective" rather than "the usual bad reputation" that it gets.

He pauses and adds: "That said, since making this movie, I now have a screen protector over my FaceTime camera."