While Mr Jeff Bezos, the world's richest person, can afford virtually any luxury, obscurity and anonymity are no longer among them

SEATTLE • Billionaire Jeff Bezos rubbed elbows this month with actors Chris Hemsworth and Halle Berry and other Hollywood celebrities at an after-party for the Golden Globes.

Last month, he walked the red carpet, along with actors Meryl Streep and Tom Hanks, at a screening of The Post in Washington.

Last Friday, Mr Bezos and his wife, MacKenzie, made public their US$33-million (S$44-million) donation to a non-profit organisation that provides college scholarships to "Dreamers", young immigrants brought to the United States illegally as children. In October, he received an award for a donation to a marriage equality campaign.

Ms Jennifer Cast, an Amazon executive who solicited the donation from him, said at the event that they could have donated anonymously to the campaign.

"But just as critical as the money was Jeff's offer to let us publicly acknowledge their gifts," she said.

"By allowing us to take their donation public," she added, "the world quickly knew that Jeff Bezos supported marriage equality."

The appearances and actions are a new look for Mr Bezos.

As he was shaping Amazon into one of the world's most valuable companies, he developed a reputation as a brilliant but mysterious and cold-blooded corporate titan.

He preferred to hunker down in Amazon's hometown - Seattle - at least partly because he thought it was better for Amazon's growing business, largely avoiding public causes and the black-tie circuit.

But while Mr Bezos - who, at 53, is the world's richest person, with a net worth of more than US$100 billion - can afford virtually any luxury, obscurity is no longer among them.

Amazon, a behemoth valued at more than US$600 billion, has become one of the faces of "big tech", along with Apple, Alphabet's Google and Facebook. These companies are facing a backlash.

Amazon is under the microscope for what critics say is its corrosive effect on jobs and competition, and Mr Bezos has become a bete noire for US President Donald Trump, who repeatedly singles out him and Amazon for scorn on Twitter.

"People are starting to get scared of Amazon," said Mr Steve Case, a co-founder of America Online, who recently started an investment fund focused on start-ups in under-served areas, with Mr Bezos among its contributors.

"If Jeff continues to hang out in Seattle, he's going to get a lot more incoming. Even for just defence reasons, he has to now play offence."

Mr Bezos' portfolio of other ventures has put him further into the spotlight.

Four years ago, he bought The Washington Post for US$250 million, jump-starting a renaissance of the paper.

In 2016, he bought a US$23-million home in Washington, one of the city's most expensive, which is undergoing extensive renovations to make it a suitable party spot for the city's political class.

Nearby neighbours include former president Barack Obama and his family, and Mr Trump's daughter, Ivanka, and her husband, Jared Kushner.

Mr Bezos' space start-up, Blue Origin, is also making its efforts more public, giving him another stage. The company is trying to rescue Earth by helping to move pollution-belching heavy industries off the planet.

"He's getting thanked at the Golden Globes and targeted by presidential tweet tantrums - not even Apple co-founder Steve Jobs had that kind of pop culture currency," said Professor Margaret O'Mara of history at the University of Washington, who organised a museum exhibition in Seattle endowed by Mr Bezos.

Interviews with more than 30 people who know Mr Bezos, most of whom declined to be identified to protect their relationships with him, revealed his awareness of the growing opposition to Amazon and his growing comfort with being in the public eye.

Mr Bezos, they said, accepts the probability of greater government scrutiny of Amazon. He has advised Amazon executives to conduct themselves so that they can pass any legal or regulatory test.

Investor Warren Buffett, who has known Mr Bezos since the 1990s, said the cautionary tale of Microsoft, which faced a landmark anti-trust case by the government that decade, must loom in his mind.

Microsoft, by far the most dominant technology company at the time, lost its footing after the case, opening an unexpected opportunity for competitors.

"You're going to get a lot of scrutiny if you're disrupting other people's livelihoods," Mr Buffett said.

Mr Bezos' more public-facing work was abetted by a management change nearly two years ago at Amazon, when he put Mr Jeff Wilke in charge of its consumer business and Mr Andy Jassy in charge of cloud computing. 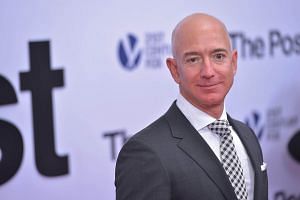 That freed him up to devote more time to The Post and Blue Origin, though he remains deeply engaged at Amazon, dedicating most of his time to initiatives that are two to four years from hitting the market.

He has also pushed for using publicity to the company's advantage.

In September, he masterminded the company's splashy search for a place to locate a second headquarters. Amazon highlighted the jobs it planned to create with the move - up to 50,000 in total - and spurred a horde of towns, from Dallas to Boston, to apply.

In the future, that means Mr Bezos will most likely be a more familiar presence in Washington.

He visits Washington about 10 times a year, dropping in at The Post for forums, discussions with engineers and meals with journalists.

In the capital's stately Kalorama neighbourhood, just off Massachusetts Avenue's row of embassies, renovations are proceeding on his home - two combined properties that used to be the city's Textile Museum.

He plans to host salon-style dinners at the house, drawing inspiration from the celebrated dinner parties thrown by Ms Katharine Graham, the former publisher of The Post, for the city's movers and shakers from both parties.

He is known for asking his dinner guests to stick to a single conversation topic at a time to keep people from splintering off into private side discussions.

Ms Sally Quinn, a long-time Post writer and an arbiter of the city's social mores, said she had no firsthand knowledge of Mr Bezos' plans for his home.

But she praised the idea of attempting to bring together guests from across the political spectrum.

"There's no one who is doing that kind of thing in Washington right now," said Ms Quinn, who bumped into Mr Bezos recently at the screening of The Post.

"It would be like a throwback to the old days."

She said: "I think Jeff is the only person who could do that."