The story: A troubled boy with a gun murders students and teachers in a high school. Celeste (Raffey Cassidy) escapes with injuries. At a memorial, when Celeste and older sister Ellie (Stacy Martin) perform an original song about the attack, they become instant sensations. That moment is parlayed into a career by a manager (Jude Law). Years later, Celeste (Natalie Portman) is a pop star and mother.

This work aims to be - take a deep breath - a musical, a satire, a piece of provocation about gun violence, a commentary about the corrupting effects of fame on artists who just want to make real art.

It aims, it fires, it misses every target.

American writer-director Brady Corbet, in his second outing as director, seems to want to make one of those brightly lit works of European pessimism, in which upbeat colours are married to the bleakest of outcomes. Think Gaspar Noe's death-dance musical Climax (2018) or Michael Haneke's suburban horror film Funny Games (2007), in which Corbet had a supporting role.

The happy music penned by real pop star Sia and music legend Scott Walker (formerly of the 1960s group The Walker Brothers, of The Sun Ain't Gonna Shine Any More fame) is juxtaposed with images of kids and teachers mown down by gunfire.

Celeste, played by Cassidy as a teen, is snatched up by the nameless manager (Law). The wheels of promotion whirl and a decade or so later, Celeste, now played by Portman, is a global phenomenon. She is, surprise surprise, haunted by her past.

Corbet never makes clear which demon is tormenting her, but she appears to have post-traumatic stress disorder. And she has a gunshot wound near her throat - the organ that she, as a singer, needs most, just in case one misses the symbolism.

It sounds like a set-up for a story about the hollowness behind the glitz, or how pain is transmuted into great art - not the most original of themes, but it is something to work with. 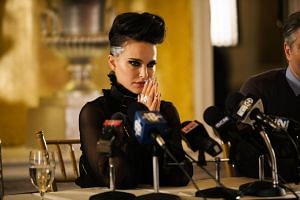 Then comes the distractions which muddy the waters, causing this viewer to lose confidence in the story. Cassidy plays the young Celeste; she then reappears as Albertine, Celeste's daughter. Is Corbet saying something about how unresolved trauma returns like karma? There are less on-the-nose ways of doing it.

Then there is the obviousness of how this is a Portman vehicle, a way for her to show range not just emotionally, but also in fashion and dance styles influenced by Sia's enigmatic art-pop attitude. Portman does a decent job, but she puts her talent in the service of scattershot material.

Is fame toxic? When one sees what it has done to Celeste, the story seems to say yes - then come the long, lovingly-composed musical sequences that suggest the opposite. Centrism is not a position. It is not nuance. It is a cop-out.