The story: In the distant future, a roboticist discovers a cyborg head in a scrapheap. Dr Ido (Christoph Waltz) revives the creature, and in her new body, Alita (Rosa Salazar) discovers astonishing speed and strength, though she cannot remember her original identity. She becomes a hunter-warrior, a specialist who captures and kills cyborg criminals. Meanwhile, sinister forces gather to harm Dr Ido and others to whom she has become close. Based on the manga series created by Yukito Kishiro.

Unlike the scrapheap pieces picked up by Dr Ido (Waltz) that would become the heroine of the picture, this movie lacks a spine, and very nearly, a brain.

This Hollywood re-packaging of a manga favourite buffs away anything that might make it stand out from the generic: It waves away questions about the "hard" science of machine-enhanced humans and ignores what might happen in a society divided between the bionic haves and the meat-only have-nots.

What is left is a dully predictable young-adult coming-of-age tale about a woman with special powers. Substitute Alita's super-strength with, say, telekinesis or clairvoyance and you would have the formula for any number of teen-driven dystopia pictures that have washed up with the Hunger Games wave.

What makes the disappointment more crushing is that this is the work of director Robert Rodriquez, who has proven adept at smart, stylish action-thrillers, in works such as Sin City (2005) and Machete (2010). The pairing of Rodriquez and co-writer James Cameron, the Midas behind science-fiction smashes The Terminator (1984) and Avatar (2009) may have set expectations sky-high, but in this movie, what becomes obvious is that the real driving force is play-it-safe Hollywood economics.

Cameron's techno-fetishism can pay big dividends - think of the cargo loader steered by Ripley (Sigourney Weaver) in his Aliens (1986) or the two-legged mecha-tanks of Avatar - and this picture's long, loving shots of Alita's hardware upgrades are part of the same fascination. 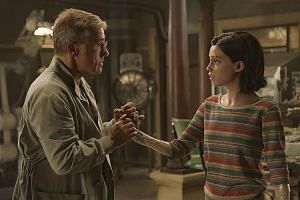 The attention paid to the shiny bits is a setup for the fights, which are impressive for about five minutes. The sequences are made more trite by the frequent "woah" moments from love interest Hugo (Keean Johnson), a disposable character engineered in the factory that makes non-threatening young males for the entertainment industry.

Cameron and Rodriquez are wizards at world-building, so this failure to cobble together a realm in which trans-humanism comes at a price, and with real social consequences, is puzzling. When anyone can become Iron Man, the idea of Iron Man as a superhero loses all meaning.