The story: An autistic man, Wen Guang (Kyo Chen), is sent out to look for work by his brother (Ernest Chong), known only as Didi (younger brother in Mandarin). But those attempts at getting hired fail. Wen Guang is compulsively drawn to objects that produce musical notes, or behaves in a way that causes potential employers to reject him. His brother, who has raised him since the death of their mother, resents postponing his ambitions to look after the selfish, child-like man.

There is something about autistic savants. From Rain Man (1988) to the hit television series The Good Doctor (2017 to present), now in its second season, savants are shown to be superheroes with tragic frailties.

We now know that this fascination is troubling because savant abilities are rare in the autistic population. It distracts public attention from painful issues those with autism face every day.

This film gets a pass for two reasons.

Firstly, this story is semi-autobiographical, and secondly, Wen Guang's (Chen) skills are useless in real life. He cannot diagnose illnesses the way Freddie Highmore's character can in The Good Doctor, nor can he employ them in a casino, the way Dustin Hoffman's character does in Rain Man.

In fact, Wen Guang's sonic super-power hurts him and his brother (Chong), because it is also a full-blown compulsion. It overrides any instruction from his exasperated brother.

The film digs into the idea of being born a brother's keeper and the pain that it causes when the one being cared for seems to understand wrong from right, but does wrong anyway. Such is the dilemma of being a moderate to high-functioning person with autism, the film seems to say.

Wen Guang looks capable of holding down a simple blue-collar job, but it feels as if he is wilfully ignoring his brother's pleas for him to follow basic social norms. 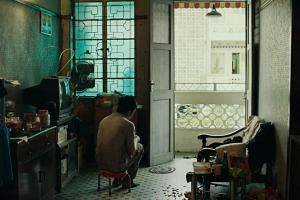 Both Chen and Chong, as the autistic man and his brother respectively, emanate authenticity. The performances are naturalistic and so good, they help the film bounce back from its third-act descent into sentimentality.

Film-maker Quek Shio Chuan, who co-wrote the screenplay based on his real-life experiences with his brother, has coaxed gut-wrenching portrayals from the two actors, while at the same time never losing a slightly acerbic comic tone.

Wen Guang is the picture of child-like innocence, but around him are supporting characters who nail their portrayals of cynical Kuala Lumpur types with a few pithy lines.

Working with cinematographer Eric Yeong, Quek has taken great care in how the film looks, from the interiors of Wen Guang's well-worn flat in KL's Pudu district to its coffee shops and street life, the film's visuals are a guilty pleasure.

Yes, the images lean towards romanticised squalor, but the craft is undeniable and arresting.