The story: A few years after the events of Creed (2015), Adonis Creed (Michael B. Jordan) is happily settled into his relationships with girlfriend Bianca (Tessa Thompson) and trainer Rocky (Sylvester Stallone). Then a local promoter issues a challenge: fight the Russian boxer Viktor Drago (Florian Munteanu), the son of Ivan (Dolph Lundgren), the man who during a bout killed his father, Apollo.

This drama of male suffering and victory works mainly because of what it does not do. It does not give in to the testosterone-driven melodrama at the story's core.

Director Steven Caple Jr, taking over from the helmer of the first film, Ryan Coogler, shows admirable restraint. This film dives into the central Drago-Creed conflict in a way that could never be called stylish, but neither is the beef over-hyped, and nor are the Dragos turned into cartoon villains, the way Ivan Drago was in his first appearance, in 1985's Rocky IV.

Instead of succumbing to sequel disease, characterised by the too-muchness of everything, this work explores the Adonis-Bianca relationship for much of the first two acts. This is all for the sake of raising the stakes in readiness for the inevitable big punch-up in the third act, of course, but Caple, and both Jordan and Thompson, take their time with the scenes and deliver the emotional beats with, at times, tear-jerking effectiveness. 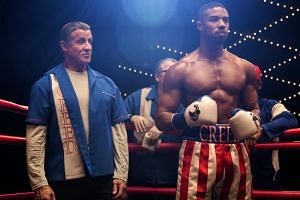 Of course no one comes to a Creed movie to see a drama about men and women chatting about their feelings, hopes and dreams.

They come to see men beat each other to a pulp and for the good guy to stand victorious over the prone body of his opponent. Caple and crew deliver on that score too, confidently and concisely, without the fight scenes degenerating into overlong punch-porn.

While delivering plenty of kinetic visuals, the bouts have a dull predictability about them as you can guess the arc of the match even before the first punch is thrown.

It is strange to say this, but the thing that carries the biggest sting here - especially in the scenes when Stallone's Rocky, aware that he is in his life's twilight, muses about roads not taken - is not the boxing, but the bonding.