SINGAPORE - Ah Lian, the feisty Singaporean inmate featured in promotional trailers for Netflix TV series Orange Is The New Black, was created entirely by Michelle Chong, the actress who portrays her in the clips.

While the 40-year-old has been interested in writing a similar character for other video clips before, she felt that the role was most suited for this particular project.

"I think the Ah Lian culture is something that is truly, uniquely Singaporean, belonging to us and us only. So when Netflix approached me to do this, I thought it was time we introduce her to the international stage.

"After all, it's very believable that Ah Lian makes it to a US prison," she says in reference to how the acclaimed TV show is set in the fictional American prison Litchfield Penitentiary.

Chong plays Ah Lian in two separate online clips to promote the fifth and latest season of the TV series - both of which have since gone viral.

On Netflix Singapore's Facebook page, the first trailer, which is set in a prison dorm room, has garnered more than 16,000 "likes", while the second one, set in the prison canteen, has gotten more than 7,500 "likes". Netizen comments about the clips have also been mostly positive. 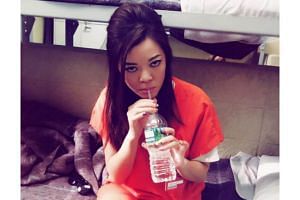 In the trailers, which were shot over three days on the show's set in New York's Kaufman Astoria Studios, Chong stars opposite American actress Uzo Aduba, known for playing Suzanne Warren, or Crazy Eyes, in the show.

Ah Lian is seen making references to Singaporean culture as well as rattling off Singlish terms to Crazy Eyes, who only half-understands what she is talking about.

For example, when Crazy Eyes demands that she gets off a canteen seat, Ah Lian replies: "You also never use tissue paper to chope."

Unfortunately, Ah Lian is featured only for promotional purposes and will not be a regular on the show.

Chong, however, has other wishes.

"I'm very happy that people love the trailers, and hopefully this will propel the producers to make Ah Lian a regular in the show," she quips.

This is not the first time that Netflix has localised its marketing strategy when promoting its shows.

Previously, the American streaming giant featured the neighbourhood of Yishun in a promotional video clip for the sci-fi horror series Stranger Things.

This month, an Orange Is The New Black-themed mural, painted by home-grown artist Yip Yew Chong, is also up for public viewing at Ann Siang Hill.

While the work features several of the show's most iconic characters, such as Crazy Eyes, Alex Vause and Piper Chapman, it is incorporated with Singaporean elements, such as a rattan chair and the wooden laundry pole.

Yip, 48, known for his nostalgic Singapore-themed murals across the country, such as Pasar And The Fortune Teller located in Tiong Bahru, says he wanted to "capture the diversity of the characters and storylines" in his latest work.

The artist, who binge-watched many episodes of the series in a day for inspiration, adds: "My objective is to make the characters be seen as human beings, and not just inmates.

"So I thought the best way to go about this was to add visual elements to the mural that would help contextualise the concept of Litchfield through a Singaporean lens."