When Ms Yanjaa Wintersoul shops at Ikea these days, she does not need to flip through the furniture catalogue to know what is new in store.

After all, the 23-year-old Mongolia-born memory champion knows every product detail and price by heart.

She can even give recommendations to shoppers looking for furniture of a specific colour or size, without looking at the catalogue.

It is an impressive feat - she memorised all 328 pages and 4,818 items in the catalogue in just one week.

Called the Human Ikea Catalogue, Ms Wintersoul, who grew up in Stockholm, Mongolia, Kenya and Tokyo, was the face of the Swedish furniture giant's promotional launch for the catalogue in Singapore, Malaysia and Thailand when it was unveiled at the end of August.

Earlier this year, Ikea sent the two-time world memory champion an e-mail asking her if she could memorise information about products.

Ms Wintersoul, who broke the world record for memorising 187 names from looking at photographs in 15 minutes at the Hong Kong Open two years ago, says: "We did a test run of (some parts of) the old catalogue and realised that 2,000 products might be too few and not as impressive.

"So we talked about it more and, closer to the launch, Ikea asked me to memorise the whole thing and I said sure."

She discovered memory techniques at university when she was trying to finish business school in two years instead of following the typical four-to five-year schedule.

Tapping a technique called "memory palace" - a favoured method among memory athletes - she weaves objects she wants to memorise into a colourful storyline, set against a familiar backdrop. 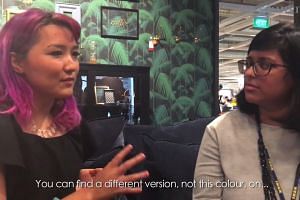 Meet the woman who has memorised Ikea's catalogue: all 328 pages and 4,818 items

Ms Wintersoul, who showcased her memorising talent on Sweden's Got Talent show earlier this year, is writing a book and will take part in the World Memory Championships in Jakarta in December.

1 What was your memorisation process for the Ikea catalogue?

So I watched Game Of Thrones from season one and looked at the catalogue at the same time. I know I should not multi-task like that... but it makes (the job) seem less serious.

2 Growing up, could you memorise things easily?

I have always had an intuitive feeling for how to memorise things that I found fun. Other people struggled with their third or fourth language in school, but I didn't because I always thought I would go to Spain or have a family there.

I would say - enjoy the process in itself so it will be easier.

3 What started you on memory competitions?

I was reading a book called Moonwalking With Einstein (2011), written by a journalist who attempted to be the United States memory champion. I thought that if a random dude can do it, I can do it too and do it better. Learning the memory techniques also helped me graduate from business school faster. It takes about four to five years usually. I finished it in two years.

4 When you are in a competition, how do you get into the zone?

5 You made it to the finals of Sweden's Got Talent, but stumbled during your segment where you had to recall a series of emojis. What happened?

People thought I was cheating so I was forced to wear a blindfold. I was not comfortable about that. Also, a lot of people in the audience were rooting for another competitor, so they yelled out different emojis.

The task was not hard, but I was psyched out for not being a favourite and by the politics of the show.

6 You are well-known on the memory competition circuit. Do you have fans?

People recognise me in Mongolia and Sweden. People (also) add me on Facebook and I gladly accept, but we never talk. That is all right, as long as you do not send me messages that you love me.

7 What is the biggest misconception about people who can memorise a lot of things?

We are not superhuman. Memory skills are trained, they are not a superpower.

People are awed by it because of how much can be memorised, but it can be learnt.

To quote American poet and civil-rights activist Maya Angelou, I don't want to be remembered for what I said, but how I made you feel.

A version of this article appeared in the print edition of The Straits Times on October 16, 2017, with the headline '4,800 Ikea items in her head'. Subscribe
Topics:
More
Whatsapp Linkedin FB Messenger Telegram Reddit WeChat Pinterest Print Purchase Article Copy permalink