As the Maze Runner film trilogy concludes with The Death Cure, its lead actors brace themselves for life outside the Maze

From time to time, there have been attempts to introduce the dimension of smell to movies, from the piping of odours into cinemas to the use of scratch-and-sniff cards.

Thankfully, no one has tried to do that for the sci-fi adventure Maze Runner flicks, given all the running about that takes place and a conspicuous lack of shower facilities.

In the first film, Maze Runner (2014), a bunch of teenagers tries to find their way out of a glade they are trapped in, one which is surrounded by a maze.

They include Thomas (Dylan O'Brien), the last male to enter the area; Teresa (Kaya Scodelario), the lone female glader; Newt (Thomas Brodie-Sangster), the second-in-command of the group; and Minho (Lee Ki Hong), a designated runner charged with combing the maze for an escape route.

The plot thickens in Maze Runner: The Scorch Trials (2015), with the revelations of the Flare virus turning humans into zombie-like Cranks; the World Catastrophe Killzone Department (WCKD) stopping at nothing to develop a cure; and the existence of a band of survivors led by Brenda (Rosa Salazar) and Jorge (Giancarlo Esposito). It ends with a betrayal by Teresa and WCKD capturing Minho and many others.

The concluding chapter, Maze Runner: The Death Cure, finds Thomas, Newt and Brenda trying to rescue Minho and venturing into the Last City, which is controlled by WCKD.

When The Straits Times asks O'Brien, Lee and Brodie-Sangster who was the most pungent among the gladers, they start throwing looks at one another and pointing fingers. The three actors were in South Korea's Conrad Seoul hotel recently to promote the film.

Korean-American actor Lee, 31, admits: "It gets pretty stinky out there."

It's rooted in sci-fi, but it's so much more than that. It's action, it's adventure, it's about relationships too. I really think the character work in these films is amazing as well as being exciting and emotional.

American actor O'Brien, 26, deadpans: "There's been times when people worried about my mental health because of the state of my hygiene on this film. Let's leave it at that."

The first Maze Runner movie came on the back of the success of The Hunger Games movies (2012 onwards) and Divergent (2014), the start of another series.

Inevitably, it was seen as being part of the young adult dystopia genre.

O'Brien says, though: "With that whole wave of young adult dystopian films that came out, when they caught on for a little while, a lot of things got lumped into that category. And we've never thought of our films as that, that's not even a genre to me."

As Lee puts it: "It's rooted in sci-fi, but it's so much more than that. It's action, it's adventure, it's about relationships too. I really think the character work in these films is amazing as well as being exciting and emotional."

What should be satisfying for fans is seeing how the threads which ran through the earlier instalments come together in The Death Cure as friendships are bolstered, enemies cross paths and betrayals are reckoned with.

O'Brien says of his character Thomas: "Everything you see him go through in the first two films really wears on his shoulders. He's like a weathered leader at this point.

"In the first two films, he so strongly believes that what he's doing is right and (here he realises), maybe he wasn't entirely right. Everyone has his point, everyone's a little right, a little wrong." 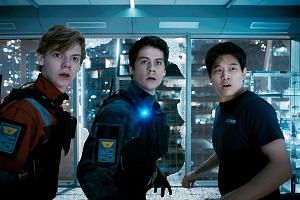 The actors themselves were excited when they first got the script for the finale, even though they had some idea of what to expect, given that the series is based on American writer James Dashner's The Maze Runner (2009), The Scorch Trials (2010) and The Death Cure (2011).

O'Brien declares: "It was the strongest starting place we had so far in the trilogy. Really wrapped up everything nicely and I thought it was handled nicely. I could see it being potentially the best of the three films and that was what we set out to do."

The rule for sequels tends to be bigger, faster, more and Lee says The Death Cure is "the most action-packed of all the movies".

Indeed, it starts with a cracker of a sequence with twists, turns and thrills as Thomas and gang attempt to rescue Minho from a train commandeered by WCKD.

Unfortunately, a stunt for the film went wrong just days into shooting in March 2016. O'Brien was reportedly hit by a vehicle and suffered a concussion, facial fracture and lacerations. It took almost a year before filming resumed in February last year.

Questions about the accident are strictly off-limits at the press junket and the actor himself steers clear of the topic.

He spoke to Vulture - New York magazine's culture and entertainment site - at length in September and said: "I had lost a lot of function, just in my daily routine. I wasn't even at a point where I felt I could handle social situations, let alone showing up and being responsible for work every day."

The toll was psychological as well as physical and it took time for him to get through the "overwhelming" recovery process.

At the press event, O'Brien seems to have fully recovered and there are no noticeable scars on his face.

He jokes around with his co-stars and embraces the experience of being in Seoul for the first time.

The first movie earned US$348 million (S$458 million) worldwide while The Scorch Trials took in US$312 million.

If the stars felt any pressure in delivering another hit, they are certainly not showing it.

With their easy-on-the-eye looks and dressed in different colour combinations of windbreaker and T-shirt for the press conference, the trio look like they could be an inclusive boyband as they earnestly take questions.

Indeed, they are greeted like rock stars at the red carpet premiere held at Seoul's IFC Mall last month. The temperature outside was well below zero, but indoors, it was sizzling as fans screamed and cheered when the trio appeared.

Lee says: "The first movie just came out of the gate so fast and did so well that (we) definitely felt it on the second one.

"You always want to build on something that was a huge success. We just hope that with this last instalment of the franchise, the fans really come out and support us as well."

The Maze Runner in 2014 marked his feature film debut and he has gone on to projects such as ongoing television comedy Unbreakable Kimmy Schmidt.

O'Brien was already getting attention before that for supernatural comedy-drama Teen Wolf (2011 to 2017) and has since starred in movies such as action-thriller American Assassin (2017). 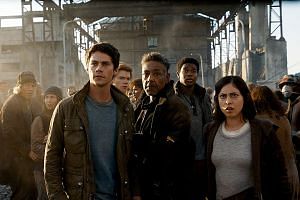 English actor Brodie-Sangster, 27, first found fame as a child actor in the romantic comedy Love Actually (2003), as a boy who falls for his American classmate.

On dealing with celebrityhood, he says: "It's a weird one. Don't pay attention to it too much? Don't take yourself too seriously. I still find it so odd sometimes."

As the Maze Runner film trilogy draws to a close - though there are still two prequel books - the actors are already making plans for what comes next.

O'Brien, for instance, has expressed interest in directing.

Brodie-Sangster says: "There's been lots of really great aspects to making the movies and yes, it is sad it's all come to an end now.

"But we're all ready to move on and take what we've learnt and adapt and grow and move forward."

A version of this article appeared in the print edition of The Straits Times on January 25, 2018, with the headline 'Light at the end of the Maze'. Subscribe
Topics:
More
Whatsapp Linkedin FB Messenger Telegram Reddit WeChat Pinterest Print Purchase Article Copy permalink