LOS ANGELES (NYTimes) - The Marvelous Mrs Maisel was the big winner on Sunday (Jan 27) at the Screen Actors Guild Awards ceremony that otherwise spread the bounty among several movies and television shows.

Tony Shalhoub took the first prize of the evening, best actor in a comedy series, for his turn as the title character's father. Then, after the show's star, Rachel Brosnahan, won best actress, Shalhoub, backed by his castmates, returned to the stage to accept outstanding ensemble - the SAG Award equivalent of best comedy.

Other major winners included This Is Us for outstanding drama series ensemble, and among film nominees, Rami Malek, best actor for Bohemian Rhapsody, and Glenn Close, best actress for The Wife.

Black Panther took a great leap forward with outstanding performance by a cast in a motion picture, beating other contenders including A Star Is Born and Crazy Rich Asians.

Singaporean actors Tan Kheng Hua and Fiona Xie were among the Crazy Rich Asians cast at the red carpet.

Unlike the 2017 ceremony, when President Donald Trump was denounced in fiery acceptance speeches, there were few overtly political moments on Sunday, which more often focused on guild issues. 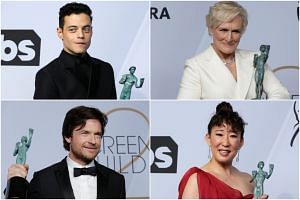 But she drew much more applause from fellow union members when she called out production companies that did not pay performers overtime and other fees.

Similarly, Jason Bateman (best actor in a drama series for Ozark) reassured unemployed actors watching at home: "You're just one job away."

After being introduced by Tom Hanks, Alda took the stage to a lengthy standing ovation from an audience.

"It may never have been more urgent to see the world through another person's eyes," he said on stage, his hands trembling. "And when the culture is divided so sharply, actors can help, at least a little, just by doing what we do."