Michelle Chong has a peculiar problem for someone about to release a rags-to-riches comedy about a woman from China: The star of Lulu The Movie has to convince the Mandarin-speaking crowd to go see it.

The marketing team from her production house, Huat Films, is buying airtime on cable television's Chinese-language channels for the film that Chong wrote, directed, produced and stars in. The movie poster, a splash of hot pink plastered across many MRT stations, features large Chinese text, while Chong herself, decked out in Lulu's trademark animal prints and spangly headband, will campaign on getai stages across the island.

"It's very risky," says Chong of what her new movie is trying to achieve - transform Lulu from a Channel 5 punchline to an articulate, fully formed Channel 8 character everyone can get behind.

She is speaking to The Straits Times in the Huat Films office in Sin Ming Lane.

Channel 8 viewers do not know who Lulu is. You would think that people would, but they don't, really. When I went for a facial, my Mandarin-speaking beautician had never heard of Lulu.

MICHELLE CHONG, who wrote, directed, produced and stars in Lulu

Lulu is a brassy karaoke hostess from northern China whom Chong created for Mediacorp's The Noose, a news satire TV show airing on the English-language Channel 5. 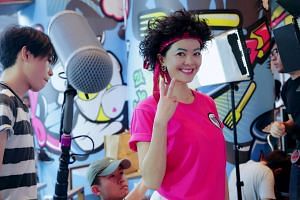 In the show - which has won Asian Television Awards for Best Comedy Programme and Best Comedy Performance (for Chong, Chua Enlai and Suhaimi Yusof) - Lulu is a caricature who airs her views to the camera in minute-long bites. She is a gaudily dressed hussy spouting Chinglish, whose catchphrases are "yessi yessi" for yes and "fei siang" for fashion.

For that character to work in a movie, Chong figures, Lulu has to speak her native tongue fluently. In other words, Lulu has to draw a Mandarin-speaking audience.

"Channel 8 viewers do not know who Lulu is. You would think that people would, but they don't, really. When I went for a facial, my Mandarin-speaking beautician had never heard of Lulu," says the film-maker, 39.

They might recognise Chong as a variety show host, but they draw a blank on Lulu, she adds.

This is her third go at directing. The first two, the romantic comedies Already Famous (2011) and 3 Peas In A Pod (2013), have Mandarin-speaking characters and star Taiwanese and South Korean heartthrobs. Already Famous had a budget of $900,000 and earned $1.4 million at the box office, while 3 Peas was made for $1.7 million and earned $500,000.

Chong's latest film, with its $1.5-million budget, has no such advantage, although it does have a supporting part for Chen Tianwen, a name and face familiar to Channel 8 viewers. She is counting on the star of 2013 acclaimed film Ilo Ilo and the marketing blitz to do the trick.

To make Lulu film-ready, the hostess' minuses had to be turned into pluses. Lulu on TV is a stereotype of the uncouth Chinese migrant worker, but in the cinema version, her tacky wardrobe signals her free-spirited nature, her blunt speech shows her honesty and where some see cunning, Chong sees street smarts.

"She's likeable, endearing, kind and positive. She wants money and love like everybody else. But she's an underdog. She doesn't come from a privileged background, but she succeeds and we are happy for her," she says.

Chong is aware that Lulu might offend a certain community here if the character remained a figure of ridicule.

It is why she paid close attention to responses from a woman from China who attended a preview. As expected, the viewer was less than pleased at an early joke, which has Lulu stealing fruit from an airport exhibit. But her mind changed by the film's end.

In pitch-perfect Beijing Mandarin, Chong imitates the woman's praise. "She said, 'This is so entertaining, so inspiring!' She didn't think it was offensive at all."

Distribution deals have been inked for Malaysia and as far away as London. Taiwan has expressed interest, but she will not risk trying to screen the film in China.

On The Noose, she broke through with three characters: Barbarella, a hunter of Caucasian men (a type known as a sarong party girl, or SPG); Leticia Bongnino, a dour Filipino domestic worker; and Lulu.

Chong had tried to buy the rights from Mediacorp for Barbarella and Lulu. The Lulu deal happened first, at a cost Chong declines to reveal.

Ms Doreen Neo, head of studios, Mediacorp, says in an e-mail that her company is "willing to release the rights to the Barbarella character under terms agreeable to both parties, as we did with the Lulu character".

"We remain open to discussions with Michelle about rights to Barbarella."

Chong sees the silver lining in doing Lulu rather than Barbarella - the SPG stereotype is less relevant today, whereas the image of the visitor from China remains "controversial and relatable - not just in Singapore, but also everywhere", she says.

Besides, Lulu is a go-getter and such people are always fun to play. Chong drops into character to recite her character's victory speech from the movie.