ABU DHABI (United Arab Emirates) • A decade ago, French architect Jean Nouvel sketched the bare outlines of a fretted dome on flimsy paper. Today, this enormous metallic-silver canopy rises over desert sands and the Persian Gulf - marking the new Louvre Abu Dhabi museum and the global ambitions of France and the United Arab Emirates (UAE) to deploy art as a diplomatic tool they call "soft power".

The vast dome and clusters of waterfront galleries beneath it will open to the public on Saturday, with sunlight cascading through the lacework of stainless steel and aluminum and layers of star-shaped patterns.

It has been a long wait for those thousands of stars to align - with five years of construction delays and technical challenges to build the estimated US$650-million (S$887-million) flagship on Saadiyat Island, by a lagoon near this capital city.

And the museum's history is also turbulent - a saga of economic downturn, collapsing oil prices, regional political tensions and fierce French intellectual debates about the risks of lending its national treasures to the Middle East in exchange for petrodollars. Through it all, the Louvre Abu Dhabi has brought together East and West and also managed to unite France's fractious national museums, which submerged envy and ego to cooperate on the project brokered by two governments.

"Although a lot has changed, not a lot has changed here," said Mr Nouvel, inspecting the museum village last week, where workmen rushed to plant garden blooms and dig one courtyard for a Rodin sculpture recently arrived from France. "The principle is that it remains a museum that belongs to the geography and culture and identity of the country."

But which country is that? Since the opening date was announced in September, planes have been roaring out of Paris about every two days for Abu Dhabi, with national treasures. The precious passengers included a self-portrait of van Gogh, Monet's 1877 painting of the Saint-Lazare railroad station and Napoleon himself - a portrait of the emperor crossing the Alps on a rearing white horse, by Jacques-Louis David. 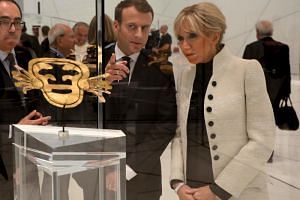 The Louvre Abu Dhabi opens after 10 years in the making

The Louvre Abu Dhabi is the result of a rare government accord in 2007 between France and this young, oil-rich monarchy on the Persian Gulf. The UAE is leasing the powerful Louvre brand for €400 million (S$633 million) for more than 30 years. Eventually it will pay a total of €974 million for French expertise, guidance and loans.

In return, 17 French museums and institutions shipped 300 artworks here this year, from Leonardo da Vinci's portrait of La Belle Ferronniere to massive marble nymphs from Versailles. French museum experts are also advising the Emiratis on what to acquire and organising temporary exhibitions for up to 15 years.

Ten years ago, the global museum community was united in opposing the notion of "renting" national treasures and risking damage by shipping them afar. But time has worn critics down, along with the general acceptance of the constant travel of artworks globally for exhibitions.

Museum officials contend that the site has been inspected recently by the French Ministry of Culture for security and temperature controls.

"It's completely secure," said Mr Laurence des Cars, director of the Musee d'Orsay and former curatorial director for the Abu Dhabi project, who is sending the self-portrait by van Gogh and The Fifer by Manet.