PARIS (AFP) - Elton John landed at Cannes on Thursday (May 16) for the premiere of Rocketman, the much-hyped warts-and-all movie about his wild rock 'n' roll years.

The 72-year-old - who once wowed fans with handstands on his piano - seemed to have difficulty walking as he posed on the red carpet in a dark suit with Rocket Man written in silver sequins on the back.

Cannes director Thierry Fremaux had hinted that John would play at the premiere.

"A piano will be hidden behind the curtain," he told reporters, with the star also rumoured to play afterwards at a private party.

But John, who seemed to be in pain as he smiled to acknowledge his fans - instead took his seat amid a standing ovation.

He also seemed to wipe away a tear under his heart-shaped sequined sunglasses as his longtime lyricist Bernie Taupin put a hand on his knee.

Earlier, John laughed off what looked like a problem with his hip when he appeared for a photocall. Instead, he joked with husband David Furnish - who produced the film - and stuck out his tongue at actor Taron Egerton who plays him. 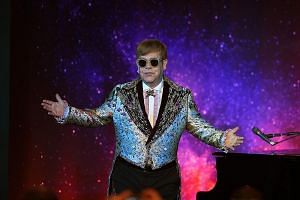 Rocketman star could get stage fright at Cannes

Furnish said earlier that the movie, which was a decade in the making, is brutally frank about the singer's struggles with drugs, alcohol and sexuality.

"I think we would have got a lot more interest (from studios)... if we'd been willing to produce a more sanitised version of Elton's life. That never appealed to Elton," he added.

"His life has had incredible moments of lightness but also moments of real darkness. We wanted to be very honest about those and not gloss them over."

Although the film is also directed by Dexter Fletcher, who was drafted in to save the Freddie Mercury biopic Bohemian Rhapsody, and has a thumping jukebox soundtrack, the parallels end there, the film-maker insisted.

That near-billion-dollar blockbuster was criticised for drawing a veil over much of the Queen frontman's private life, something that cannot be said of Rocketman, Fletcher said.

He added that despite the huge success of Bohemian Rhapsody, his real passion was always for Rocketman.

"I did what I had to do (on the Mercury film) but really my focus was always Rocketman."

Fletcher said the film is not "an official biography" but instead an expression of John's own memories which, given his years of hard partying, were sometimes a blur.

"We are inside Elton's memories of his life. And memories are fallible... things get mixed up and confused," noted the director.