The story: American author and journalist Jeannette Walls (Brie Larson) is torn between embracing her current upscale New York City lifestyle and that of her unconventional parents, who gave her and her three siblings a peripatetic upbringing amid extreme poverty, occasional violence and moments of beauty. Her father Rex (Woody Harrelson) is an unrepentant idealist and alcoholic given to grand schemes such as building a glass castle as the family home; while her mother Rose Mary (Naomi Watts) is an amateur painter seemingly incapable of grounding herself in reality.

The problem with this movie, based on Jeannette Walls' 2005 best- selling memoir, is all too apparent when the end credits roll and documentary footage of the real Walls family is shown.

Almost nothing in the movie comes close to possessing the loose-limbed authenticity of the actual Walls personalities. 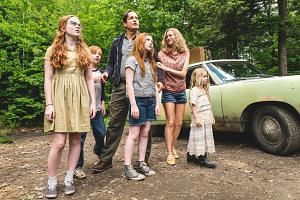 Rose Mary's easy laughter and Jeannette and her siblings' dry humour are not captured in the overly grim fictionalised account of their younger selves.

If the patriarch Rex were still alive when the documentary footage was shot, he probably would have been nothing like Harrelson's cliched portrayal of Hollywood's idea of an eccentric, misunderstood alcoholic.

Despite the casting of genuine movie stars such as Oscar winner Larson (Room, 2015) and Oscar nominees Harrelson and Watts, The Glass Castle cannot escape the simple-mindedness of a mediocre made-for-TV movie.

The tension between Rex and Rose Mary's idealism and irresponsibility is unconvincing.

Instead, it feels like a Manichean construction, an either/or proposition when it could have been both in reality.

The same could be said of the adult Jeannette's supposed conundrum: Should she stick with the comfy yuppie lifestyle with a financial analyst fiance that she has earned or be "true" to herself and embrace the resolutely unruly bohemian lifestyle of her family?

Her choices, as portrayed in the movie, are clearly skewed towards the gloriously liberal left, however dysfunctional, because the opposite of that is no doubt the soulless, regimented right.

Like how the young Jeannette was not given a choice as to the kind of childhood she would have preferred (that is, a stable, less volatile one), director Destin Daniel Cretton does not truly give viewers the option of thinking outside of black- and-white schemes.

A version of this article appeared in the print edition of The Straits Times on September 20, 2017, with the headline 'Life in black and white'. Subscribe
Topics:
More
Whatsapp Linkedin FB Messenger Telegram Reddit WeChat Pinterest Print Purchase Article Copy permalink