The singer and lead of the Oscar-nominated film A Star Is Born (2018) gave Horton a kiss - a moment that was captured on camera, sparking talk that Horton is her new beau.

The 33-year-old singer, whose real name is Stefani Germanotta, broke off her engagement to talent agent Christian Carino in February this year.

Since then, Horton is the first man she has been spotted with. Little is known about him, although he works in the entertainment industry.

According to his LinkedIn profile, Horton has been working with Gaga since at least November 2018 - as a monitor engineer for her live performances.

He has also worked with other major names such as Bruno Mars, Lenny Kravitz, Justin Timberlake, and Jay-Z.

He was previously married to singer-actress Autumn Guzzardi, but the two have since split up.

Gaga was also once engaged to actor Taylor Kinney but the two called off their engagement in 2016. 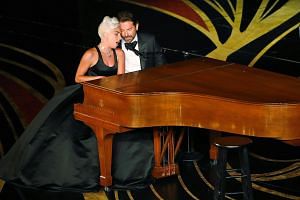 Fans previously tied Gaga to Bradley Cooper - the director and actor starring opposite her in A Star Is Born, citing their palpable chemistry during a performance of Shallow, the movie's lead soundtrack, during this year's Oscars.

Gaga eye-rolled and quashed the rumours on talk show Jimmy Kimmel Live, saying: "First of all, social media, quite frankly, is the toilet of the Internet. And what it has done to pop culture is abysmal.

And people saw love, and guess what, that's what we wanted you to see."

Cooper split with supermodel Irina Shayk in June this year.