GIRLS' NIGHT OUT AT BAR ROUGE

When:Thursdays, 8pm to 4am Admission: Free for women, $25 for men with one standard drink Drink deals for women: Free flow from 10pm to 1am, with two types of spirits and two types of mixers to choose from (for example, vodka cranberry or Cointreau sprite) 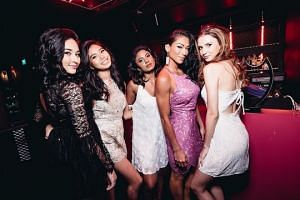 Drink deals for women: $15 glasses of prosecco all night long

Bottle deals: Various deals ranging from $500 nett for a bottle of vodka/whisky and a bottle of champagne to $4,688 for three magnums of Dom Perignon champagne. These deals are available every night.

GLAM NIGHT AT ATTICA (above)

Admission: Free for ladies, $20 for men before midnight and $28 after midnight with two free drinks

Bottle deals: Free bottle of proscecco for women in a group of five or more. E-mail enquiry@attica.com.sg before 6pm on the day of visit. Select gin, vodka, rum, tequila and whisky bottles at $198 nett before midnight.

When: Thursdays, 9pm to 2am

Admission: Free for all guests with one-for-one drinks all night for guests who present name cards

Drinks deals for women: Free flow from 9pm to 1am for selected cocktails, wine and housepours.

LIPSTICK MAFIA AT AVRY (above)

Admission: Free for women, $25 for men including one drink

Bottle deals: Various deals ranging from $550 for a magnum of Belvedere vodka from 10pm to two bottles of Veuve Cliquot champagne at $300 from midnight. Early entry specials (from 10pm to midnight) with one-for-one house pours, one-for-one tray of Queen shots, one bottle of Veuve Clicquot at $118 and Jaeger Bombs at $10 each

A version of this article appeared in the print edition of The Straits Times on February 24, 2018, with the headline 'Ladies' nights to check out'. Subscribe
Topics:
More
Whatsapp Linkedin FB Messenger Telegram Reddit WeChat Pinterest Print Purchase Article Copy permalink