Ku Hye-sun knows how to get another word in about her failed relationship with husband Ahn Jae-hyun.

The revelations started in August when she revealed that she was fighting an attempt by the actor to separate from her.

The actress opened up on social media about how he disrespected her. Ku, 34, said Ahn, 32, liked alcohol and that he spoke to other women on the phone in front of her.

She claimed that Ahn told her that he did not find her sexy, and that he would watch YouTube videos, with the sound set at a loud volume, before falling asleep.

The couple met on drama Blood in 2015 and got married the next year.

Ahn did not engage in an online spat with her but the feud led to cosmetics brand Merbliss and fashion chain Giordano cutting ties with him.

He had to apologise to Oh Yeon-seo, his co-star in drama People With Flaws which they were shooting recently, after Ku posted that he was having an affair.

Though she did not mention Oh's name, her post left little doubt over who she was referring to.

The non-stop washing of dirty laundry in public ceased only after netizens blasted Ku over her intention to extract maximum pain from Ahn, and after lawyers from both sides worked out a gag arrangement. 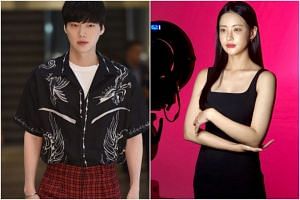 But Ahn, who recently filed for a divorce, is back in the firing line from Ku again, this time in song.

She has released a piano-driven single called Must I Die?.

It hits out at him though his name is not mentioned.

The lyrics go: "Nothing lasts forever. I have lost my feelings, and you forever lost me. I don't have time to look back at the loneliness."

Her defiance is also captured in the taunting lines "Is there a tomorrow where you're better than yesterday?" and "I'll never be there again".

Her new attack has drawn fire from netizens who wonder what it will take for her to finally shut up and just go on with her life.