SINGAPORE - KK Women's and Children's Hospital (KKH) has thanked British actor Tom Holland for swinging by to visit its patients when he was in town last month.

In a Facebook post on Tuesday (July 11), the hospital said Holland, who plays the wall-crawling, web-slinging superhero in the latest instalment of the Spider-Man franchise, charmed patients and families, and presented autographed toys to children.

The 21-year-old was accompanied by his co-star Jacob Batalon, who plays his best friend Ned Leeds in the film.

KKH wrote: "A big Thank You to Tom and Jacob, for the awesome experience and for bringing cheer to the wards!"

Spider-Man: Homecoming, which was released in local cinemas on July 6, is the second reboot of the film franchise, after Marvel Studios struck a deal with Sony Pictures, which owns the rights to the character.

Holland is the third actor in 15 years to play Spider-Man. Tobey Maguire and Andrew Garfield starred in three and two films respectively.

In an interview with The Straits Times during his Singapore visit, Holland revealed he had been eager to play up the more playful, child-like side of the character. 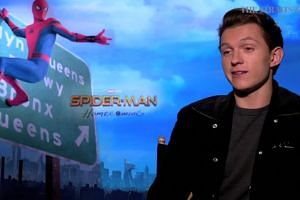 Tom Holland, first Spider-Man who looks like a high school kid, has fun with the role

"It's just about making sure that I feel like the kid that everyone wants to be and just have fun with that," he said.

"One of the themes of this new movie is, 'What would a 15-year-old boy do with superpowers?' So it's about keeping him grounded and for the audience to see a kid as a superhero."

He first donned the red-and-blue costume for a brief cameo in 2016's Captain America: Civil War, to rave reviews.

Homecoming has been well-received by critics, earning an estimated US$117 million (S$162 million) at the box office over the weekend.