Boyz singer Kenny Kwan is no longer singing the blues.

His world collapsed when a concert scheduled at the Hong Kong Coliseum was canned after Steven Cheung, the other half of the pop duo, was slammed by netizens over his womanising ways.

Cheung, 34, recently posted that he was going to marry a fan, with whom he has a son.

The news shocked Cheung's long-time girlfriend April Leung who posted her unhappiness over the revelation and anger that he had kept her in the dark.

Kwan, who was in Thailand then to shoot a video to promote the concert, could not contact Cheung too to clarify matters. 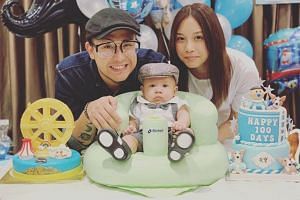 'What about me?': Girlfriend of HK singer Steven Cheung caught by surprise at news he is marrying fan

Kwan, 38, later posted a video on YouTube to express his sorrow over the end of his dreams to perform at the Coliseum, where all the big names flock to.

But his music label has since made a U-turn, encouraged by the support that Kwan has drawn from fans who have taken note that he has not blamed Cheung for the fiasco.

Kwan will now perform solo at the Sept 14 gig, and can expect to be backed by guest appearances from heavyweight label mates like Joey Yung and Leo Ku.

Oriental Daily quoted Kwan as saying that he is grateful for the turnaround in his fortunes and will not let anyone down at the upcoming concert.

Cheung, who has also been accused by other women over his wooing of them, has since apologised to Kwan and the women for his "horrible" behaviour.