Behind the scenes of the magical adventure film, Fantastic Beasts And Where To Find Them, J.K. Rowling might be the one person with the closest thing to real magical powers.

Wielding words instead of a wand, the Harry Potter author decided to write the script and knocked it out of the park despite being a first-time screenwriter, according to the cast and film- makers.

They spoke of witnessing the same prodigiously fertile imagination that produced the seven best-selling Potter books (1997- 2007) and inspired eight hit films (2001-2011), to which Fantastic Beasts serves as a sort of prequel, taking place about 80 years before Harry's birth.

They were talking to The Straits Times ahead of the film's release here tomorrow.

Rowling attended the same press event. Despite her status as a sort of literary rock-star, the world's first billionaire author - whose real first name is Joanne - she is rather unassuming in person. Her eyes brim with warmth and wit as she interacts with reporters and the cast of the film.

Clearly, I don't need to write any more. But I love it so much, it would feel like some sort of psychic amputation if I didn't do it. I have to write.

It is a rare public appearance for the 51-year-old, who shows up glamorously in a leopard-print wrap dress, yet she is clearly nervous as she ascends the podium, apologising needlessly after stumbling into a chair.

As she set about crafting the new story, which revolves around the character of Newt Scamander (Eddie Redmayne), a "magizoologist" who arrives in 1920s New York with a briefcase full of magical creatures, it occurred to Rowling that she was in uncharted waters.

"I did buy a (screenwriting) book that I never read," she says with a smile. "It just sat on my desk."

Director David Yates says Rowling "went on a steep learning curve over a period of a year to two years" as she wrote the first of the Fantastic Beasts screenplays, which are based on a "textbook" she penned for the Potter universe in 2001.

"But what's amazing about her is the ideas pour out at such a rate," says the 52-year-old film-maker, who helmed four of the Potter movies and will direct all five films expected in the Fantastic Beasts series.

"Often, it would take Jo less time to rework a sequence than it would take us to give her notes on them - we couldn't keep up," he says, revealing he would ask for "a basic 12-page script outline and, boom, she gives us 102 pages two days later, full of great ideas". 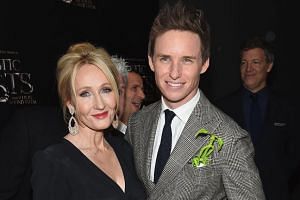 Nightmare of a mating dance for Eddie Redmayne 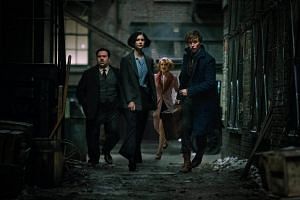 Movie reviews: Fantastic Beasts And Where To Find Them is tremendous fun to watch

It helped that Rowling has been thinking about Scamander's backstory since first mentioning his name as the author of a textbook used at Hogwarts - the magical boarding school from the Potter books.

She says: "The character of Newt appealed to me. I had some thoughts about what happened to Newt and who Newt was."

When the book was optioned, she decided to write the screenplays. "I thought, 'I'd better tell them because I wouldn't want them to get Newt wrong.'"

While it has been a decade since her last Potter novel, Rowling's creative muscles have not atrophied. She has penned three crime novels under the pseudonym, Robert Galbraith, and her first stage play, Harry Potter And The Cursed Child, opened to glowing reviews in London's West End earlier this year.

"As far as writing is concerned, I need to do it," she explains. "I feel strange if I don't write."

With Fantastic Beasts, the Warner Brothers studio is hoping to recreate the success of the Potter movies which conjured more than US$7.7 billion at the global box office, making it the top-earning film franchise of all time.

But Rowling says commercial success is not what she is after.

"Clearly, I don't need to write any more," she says. "But I love it so much, it would feel like some sort of psychic amputation if I didn't do it. I have to write."

Rowling, who famously penned the first Potter book while being a single mother on benefits in Scotland and writing in cafes while her daughter slept, adds: "I can write anywhere, at any time. I served quite a hard apprenticeship as a lone parent when I decided I was going to write that first book."

Now, she says she can turn it on at the drop of a hat. "I can write with the television on in the background. I can write half-answering my kids' questions. I have written a surprising amount in the lavatory - which is the only place I could get temporary peace."

She hints that writing has also helped her cope with the victory of Mr Donald Trump.

Rowling, who has become a vocal cultural critic and advocate for progressive social causes, described the American President- elect in a June essay as a "man who is fascist in all but name" and who "wears his disdain for women and minorities with pride".

Heading to New York the day after the election result, she says she "was in a bleak mood boarding the plane and I thought, 'I need to work.' So, I got out the second screenplay and did work on that. It made me feel better."

But she sidesteps a question about Mr Trump's win, revealing only that her new movie was inspired "by what I see as a rise of populism around the world" with movements such as his, although she says she began thinking about these issues before his entry into politics.

Hence the film's backdrop of a world that is becoming increasingly fearful of the wizarding community, with a growing movement to eradicate them.

"If you have read the Potter books, you'll know this period of history threatened to become very dystopian. You were looking at the rise of a very dark force," she says.

"I hope when people see the movie, they will understand that it grew out of things that are very important to me in the world at the moment."

•Fantastic Beasts And Where To Find Them opens in Singapore tomorrow.