Songs by Singaporean singer-songwriter JJ Lin took the top two spots in this year's U1000 Music Countdown Chart, while a song from the popular Chinese drama series, Story Of Yanxi Palace, finished in third place.

Lin's Little Big Us was No. 1, followed by another of his songs, Twilight.

In third place was Chinese singer Lu Hu's The Sound Of Snow Falling, the closing theme song of Yanxi Palace.

It is part of the radio station's annual campaign to identify listeners' favourite Mandarin pop songs of the year.

This is the chart's seventh edition. The results were announced yesterday at Capitol Singapore's outdoor plaza, where a crowd of more than 4,000 UFM100.3 listeners gathered to cheer and sing along as the final rankings were announced. 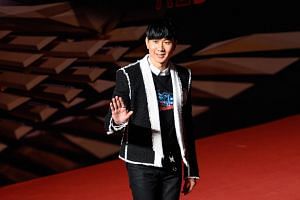 Also in the top 10 were A-Lin's A Kind Of Sorrow, Hebe Tian's A Little Happiness, Jay Chou's Love Confession, Liu Wen-cheng's Drizzle In March and Dave Wang's A Game A Dream.

UFM100.3's assistant programme director Christie Ng, also known as Xiaozhu, said: "U1000 has always been the people's chart. They like the songs, they nominate and vote. The songs usually reflect what is trending currently."

She pointed out that it came as no surprise that local actor Aloysius Pang's song, Black Tears, was among the 2,000 shortlisted songs this year.

Pang died in January after a military training accident.

"His final ranking of 137 shows he is deeply loved and missed by Singaporeans," she said.

She added that the number of nominations and votes this year broke all records.

"U1000 is gaining momentum every year. If this continues, we may need the Singapore Indoor Stadium for our finale countdown one day."

UFM100.3's assistant music director Hu Tianpei said: "It is not surprising that the soundtracks of movies and TV series did well this year."

"Chou is expected to release a new album and go on tour soon, while Chan has been focusing on producing music that he believes in," he said.

"Next year will be Sun's 20th year in showbiz, and that will definitely bring about a wave of memories."