She came in first in the first episode that aired last Friday night, with a textbook performance of her smash hit, Domino, said Chinese reports.

Hong Kong newcomer Tien Chong came out of nowhere to take second place, with a mash-up of the Mandarin and English hits, Dancing Diva and Lady Marmalade.

Chinese rapper Gai took third place with his version of The Sea Laughs, the theme song from the Swordsman movies.

Chinese rock star Wang Feng, one of the biggest names in the line-up, was ranked fourth.

The rankings of the other singers - Taiwan's Angela Chang and Sam Lee, and China's Li Xiaodong - were not announced, but they are in danger of being eliminated in the second episode.

Following her debut on Singer, one of China's biggest contest shows, Jessie J was a hot topic on Weibo and WeChat, said reports. Her Weibo following has grown to more than 230,000. 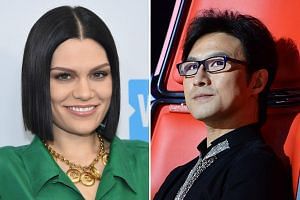 She wrote on Weibo: "Thank you, China!"

Jessie J, the show's first Anglo-American contestant, was asked in the first episode why she had chosen to compete in a non-English-speaking country.

She said: "I'm turning 30 this year and I just think, why not? It's an experience I'll never forget and may never get again and I'm gonna sing like I've never sung before."

The show, formerly titled I Am A Singer, was won by Hong Kong pop diva Sandy Lam last year.