HONG KONG - Aaron Kwok, the only Heavenly King never to have married, seems keen to change that.

Barely a month after his 50th birthday, the Hong Kong singer and actor introduced his girlfriend, Chinese model Moka Fang, 27, on Weibo on Tuesday night. 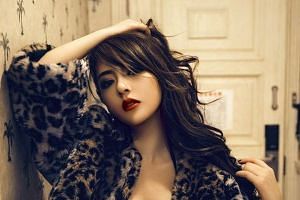 He posted a photo of two clasped hands - his and hers, presumably - in front of a dashboard, with the caption: "This way, you have to drive a little slower". He tagged his girlfriend's Weibo account at the end of the post, and sealed his announcement with a heart emoticon.

She is the only girlfriend he has openly acknowledged, said Apple Daily. His seven-year romance with Chinese model Lynn Hung, which ended two years ago, was largely underground.

His introduction of Fang follows weeks of public appearances where he talked about his readiness for marriage and fatherhood, said the report.

Fang, who is from Shanghai, is based in Hong Kong. She released a pictorial book in 2012.

Kwok has followed her on Instagram for some time, said Ming Pao Daily News. The Weibo photo he posted was taken in a left-hand drive car, possibly when the couple were travelling in her native China, added the report.

Apple Daily, quoting other reports, said the two had been secretly dating for a year.

Her name emerged in the gossip pages last year, after a woman alleged Kwok was two-timing her with other women and pursuing a model with the initial M. Fang was one of the models lined up, as the tabloids wondered who had stolen Kwok's heart.

Hung still has a chance to be Mrs Kwok, however. She is dating actress Kenix Kwok's brother, Ken.