An unlikely bromance blossoms in the middle of an old-fashioned action film set in the heart of Paris: Bastille Day, British director James Watkins' tribute to his favourite 1970s chase movies.

It comes in the form of a partnership between would-be James Bond Idris Elba and Game Of Thrones star Richard Madden.

"Idris is this kind of granite, this edifice, this wall, and Richard is this little terrier, nipping at him," Watkins, 42, says in an interview in London. 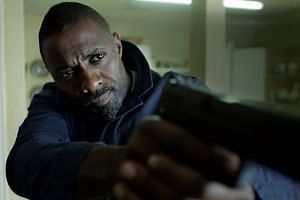 "There's a lightness of tone in places as well as a toughness. I was really looking back to the 1970s, emulating the movies that I loved. Walker (played by Lee Marvin) in Point Blank, Robert De Niro in Midnight Run.

"Tonally, the film is about these guys on this journey, a buddy journey, and their relationship."

Elba, in a separate interview, puts it this way: "Two strangers who have no friends are forced to like each other. They go on a road trip."

For the little fights and chases, I went back to some of those 1970s models, old-school style. With CGI, you can do everything and break the laws of physics... it's just nonsense. We wanted the scrappy aesthetic a little.

The strange collaboration begins with Madden's character Michael, a pickpocket, eyeing some booty belonging to a nervous office worker that turns out to be a bomb. One thing leads to another and, soon, he has potential terrorists, rogue militants, the French police as well as CIA agent Sean Briar (Elba) pursuing him.

But who is actually behind the explosive? And is everything really as it all seems?

Michael is identified via social media, which in turn takes on a crucial role later in the film as things escalate upon the coming of France's independence day.

It all boils down to what Watkins calls the classic Hitchcockian set-up.

"Basically, the guy just took the wrong bag. And this creates an energy, then it becomes a double chase structure - they're trying to find who owns the bag; others are chasing them for the bag.

"And then it's shadowy people weaving around through Paris."

There is plenty of dodging around dark alleyways, gloomy shopfronts and crowded markets.

However, the big thrill involves an old-school rooftop chase that sees the actors pretty much doing most of their own stunts.

From jumping off ledges several storeys onto the ground to clinging onto windows and eaves by their fingernails, all of the footage is real.

As it turns out, Elba and Madden were put through six weeks of obstacle course training in preparation for the scene, which was filmed on a set that involved building a rooftop on another rooftop in Paris, in the open air.

"I'm scared of heights and I wanted that to come through," Watkins explains.

"For the little fights and chases, I went back to some of those 1970s models, old-school style. With CGI (computer-generated imagery), you can do everything and break the laws of physics and jump out that window and grab that helicopter and it's just nonsense. We wanted the scrappy aesthetic a little."

Whether the movie is CGI-free or not, what does make it come too close to reality for comfort is the fact that filming wrapped up just before the tragic Charlie Hebdo killings in Paris, in January last year.

Now, the picture is also going to be released barely two months after terrorist attacks in Brussels.

Watkins says: "I had a French crew, French actors - we spent a long time in Paris. So your heart goes out to Paris and people you know there.

"But the inciting incident at the beginning with the explosion - I did not want to make more of that. I think the film is not about that," he adds. "The film was conceived as a rip-roaring Friday night movie. At the same time, it does glance at some of these social anxieties - be it the oppressed or the excluded, the disenfranchised."

Elba, 43, adds: "The film is about good versus bad in the city, completely different from our world. That's not to say we are insensitive to the similarities of violence, considering the events of Paris just after we finished shooting."

A version of this article appeared in the print edition of The Straits Times on April 20, 2016, with the headline 'Reliving the thrill of the chase'. Subscribe
Topics:
More
Whatsapp Linkedin FB Messenger Telegram Reddit WeChat Pinterest Print Purchase Article Copy permalink