LOS ANGELES • In her recent single Sober, Demi Lovato sings: "Mummy, I'm so sorry I'm not sober anymore. And daddy, please forgive me for the drinks spilled on the floor."

On Sunday, the American singer, 25, promised on Instagram that "I will keep fighting" to mend her ways, in her first remarks since an overdose nearly two weeks ago.

Writing to her more than 70 million followers on Instagram, Lovato gave few details of her July 24 hospitalisation.

But she candidly wrote: "What I've learnt is that this illness is not something that disappears or fades with time. It is something that I must continue to overcome and have not done yet."

Lovato suggested that she may not be returning to the public eye soon.

"I now need time to heal and focus on my sobriety and road to recovery," she wrote.

Lovato has long spoken of her struggles with depression, eating disorders and addiction. 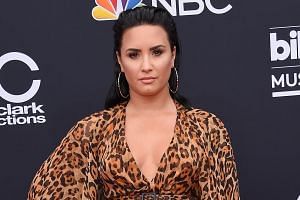 Demi Lovato shows fans 'It's okay to be broken'

A 2012 documentary, Demi Lovato: Stay Strong, showed how she used to abuse drugs several times a day before finding her way into rehabilitation and reviving her career.

The singer, whose hits include Sorry Not Sorry (2017), was rushed from her home to a hospital by emergency responders. It remains unclear on which drug she overdosed.

Her plight prompted a flurry of statements of solidarity from fellow stars, who praised her personality, and fans who said they overcame their own demons by taking courage from the lyrics in her songs.

A version of this article appeared in the print edition of The Straits Times on August 07, 2018, with the headline 'I will keep fighting: Demi Lovato'. Subscribe
Topics:
More
Whatsapp Linkedin FB Messenger Telegram Reddit WeChat Pinterest Print Copy permalink